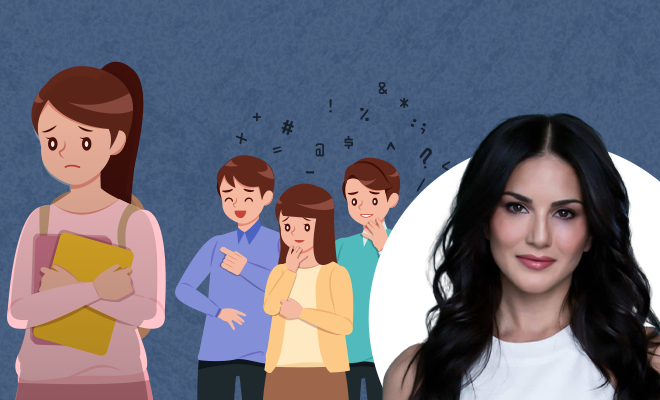 Given the kind of society and surroundings we have all been raised in, where the behaviour and practices adopted by young children are seldom kept in check, chances are that most of us have either been bullied as children, or been the ones bullying others. Or worse, indulged in both. And while it may have become all too common to the point of getting normalised, it is not acceptable. And actress Sunny Leone, having been on the receiving end of it, is of the same view.

Opening up about her childhood experiences, Sunny Leone spoke with TOI as she talked about how unpleasant bullying is, coming from her own personal experience. She said, “I wasn’t bullied to the degree that I think some people are there was some bullying, I was a light-skinned Indian girl with black, dark hair on her arms and legs and face and very awkward looking not very dressed well. So yeah, there was some bullying, it’s not fun.”

She went on to say, “Some of that bullying has carried through my entire life which is not a great feeling.” A fact that has been shared by several other victims time and again, saying how being bullied stays with them long after it is over.

Also Read : Sonakshi Sinha Talks About How Online Trolling And Cyber Bullying Has Increased During The Lockdown. It’s Sad, But True.

#SunnyLeone talks about how she was bullied as a kid and what we can do to end this social evil.https://t.co/FxGdtAzkUE

Sunny Leone went ahead to relate bullying to a circle and said it “… is like a circle, it goes around so usually when we see people who are bullied, they end up usually bullying somebody else. So, if you are being bullied maybe we can make a conscious effort to not bully and treat others maybe how we are being treated also taking a stand for yourself, usually, bullies are cowards.”

Furthermore, taking a stand and urging people to do the same to bring this practice to a stop, she said, “Make your statement or tell someone to stop. That’s usually, sometimes it might work, I wouldn’t say that it would always work, because they don’t want to build false hope. But I think if you’re consistent, and you ask for help from people around you, then that cycle of abuse will stop.”

No one should be made to succumb to harsh and bitter physical, mental or emotional abuse in the form of bullying. And if there’s something that needs to be normalised, it is asking for help, and not shying away from it. We are glad women as influential as Sunny Leone are choosing to open up such very real and persistent issues and address it.