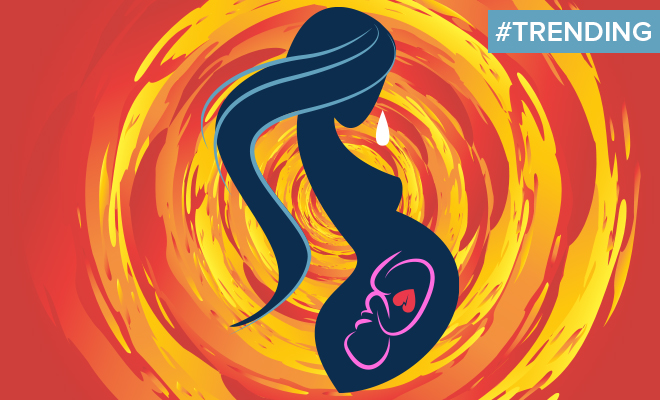 Studies Predict That India Will Have 6.8 Million Fewer Girls Being Born By The Year 2030. Because We Continue To Kill The Girl Child

Back when I was born in 1996, my parents were excited by the birth of a girl child, completing our family .  My elder brother had been around for more than a couple of years by then and in the eyes of the society, they were already deemed ‘lucky’ and ‘complete.’ But my parents really wanted a girl and there I was. However, other women haven’t had the same kind of happy beginning/ending to a story like this, many foetuses killed before they could be born.

You see, a country that has literally glorified gender-based crimes and where the women have been failed time and again, isn’t just female infanticide is just one of the many evils. Yes, we are casual about it because it seems like us crying hoarse isn’t really turning things around. Somehow, women have become the bigger evil in this patriarchal society, and their eradication in whatever way possible, is the ultimate agenda. So threatened by our existence, most women aren’t even given a chance to be born, leading to a high rate of abortion of girls.

The matter has escalated to a level that a study recently revealed how due to the alarming rate of female foeticide, an estimated 6.8 million fewer female births will be recorded across India by 2030 due to sex-selective abortions in Uttar Pradesh.

NO Surprise…!
“Selective abortion in India could lead to 6.8m fewer girls being born by 2030 ….India is estimated to have 63 million fewer women since sex determination tests took off in the 1970s” #selectiveabortion #misogyny https://t.co/h4O0qNsTjs

Undertaken by researchers from King Abdullah University of Science and Technology (KAUST), Saudi Arabia, and Universite de Paris, France, they came to the conclusion that with only girl child being aborted, there is a distinct discrepancy in the sex ration between girls and boys in India, ever since 1970s, which is when the prenatal sex selection came into place. So much for all the ‘beti bachao‘ campaigns.

Also Read : A Group Of Researchers Develop An Algorithm To Detect Misogynistic Content On Twitter. Does This Mean There Is Hope For Women On Social Media?

With a study that covered a survey around the 28 states of India, it was found that people from almost 17 states showed a positive effective of son preference, with the highest concentration of this  in the most northwestern States or UTs, the researchers said.

Come to think of it, there are a number of reasons for such an imbalance in the sex ratio, and almost all of those have to do with the deeply misogynistic and problematic mindset of the society that has been nurtured with the idea that women are a burden on their families. For centuries their roles have been reduced to a homemaker, while the man is regarded the bread winner of the family. Not to forget, the age old tradition of paying exorbitant amounts of dowry at the marriage of a girl, all of which ultimately demotivates families to have a girl child, one they ultimately have to marry off cowered in debts they take for the wedding.

An estimated 6.8 million fewer female births will be recorded across India by 2030 due to sex- selective #abortions, according to a study that projects the highest deficits in the birth of girls will occur in Uttar Pradesh.https://t.co/6IwvwLRtdI

And the result of this, the birth ratio is going to be skewed. “We project that the highest deficits in female births will occur in Uttar Pradesh, with a cumulative number of missing female births of 2 million from 2017 to 2030,” the researchers shared. They further wrote in the study that, “For the whole of India, summing up the 29 state-level projections, the cumulative number of missing female births during 2017 to 2030 is projected to be 6.8.”

And if that doesn’t scare you, we don’t know what will. Because ultimately, no amount of men could ever be able to sustain a population, considering they can’t push babies out of their bodies when the time comes. Which is why, it is about time people ponder over the repercussions of their murderous actions and put an end to this female infanticide.

Also Read : 30 Years Ago, The Bihar Government Introduced Period Leaves For Women Employees. And We Are Still Debating It In 2020

GET HAUTERFLY IN YOUR INBOX!
Related ItemsFeaturedTrendingfemale foeticideselective sex abortion in indiaindia to have 6.8 million lesser births of female child by 2030female infanticide india