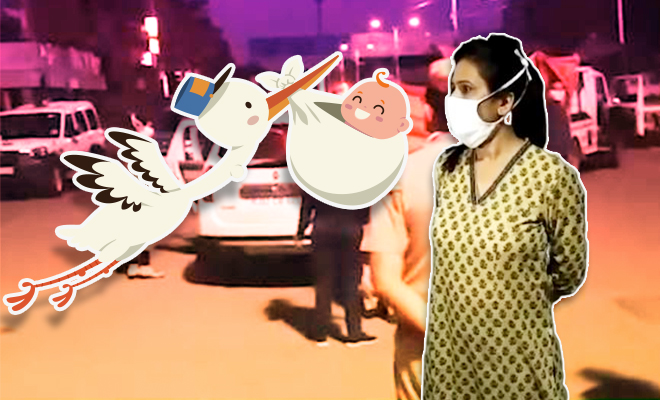 SpreadPositivity: A Police Team In Jodhpur Helped A Woman Give Birth. How Incredible Is This?

I know that coronavirus has left a dent so deep that it might take years for us to stabilize it. It has plagued us with infection and uncertainty, two elements that can overturn our world as we know it. No, I am not being dramatic, it’s true. Life after coronavirus is going to be very different than what it was before. I know I am going to be super wary of people, think 20 times before willingly going into crowded areas, wash my hands like a maniac and my biggest fear is going to be a sneeze followed by a cough. My point is, life, as we know, will not exist in the post-apocalyptic world. But that’s okay, I have always found the concept of “normal” to be subjective anyway.

Although, if I am being my overly optimistic self, I have to say that I am hoping that once the dust has settled, we continue to be as united as we are while fighting the battle. Think about it, before corona India wasn’t exactly united. There was bitter rivalry and despair everywhere you looked (you just had to look hard enough). But now? Everyone is helping each other out without asking about their religion or monetary background, the police who were once known as lazy and corrupt have emerged as the crowned kings of this war and people are so focused on eradicating this virus that their perceptions might have begun to change. I guess a common enemy is exactly what we needed to unite.

I have been coming across incidents from all around the country about how people are helping each other out and lifting each other’s morales. Which is awesome, but what is better than that is the way the police have handled themselves during this pandemic. From celebrating the birthday’s people who are quarantining all by themselves to distributing food to the needy, they have done a brilliant job. Today, I came across yet another incident from Rajasthan where the police have gone out of their way to help a woman give birth.

Also Read: Delhi High Court Rules For Pregnant Women’s Health To Be Prioritsed During The Covid-19 Lockdown. We Think It Was Necessary

Going beyond their duty, always. https://t.co/1dK0RJY1Ds

A team of police personnel from Jodhpur came to the rescue of a pregnant woman whose car broke down near a barricade while she and her husband were on their way to the hospital. The police said that they noticed a non-functioning car around 7:30 pm with a woman inside wailing in pain. They realised that it was too late to call for medical assistance as the woman’s delivery process has begun and the baby was crowning.

The Deputy Commissioner of that area Preeti Chandra asked her women constables to cover the area where the vehicle was parked and sent the men constables to find a doctor and a nurse. She told a publication, “I asked my men to bring some doctor or a nurse. However, the woman’s delivery process started, and the baby was coming out. The woman gave birth to a girl child, and finally, we could arrange a paramedical staff and ambulance. She was taken to the hospital with the child to complete other medical intervention.”

The police team stayed with the woman and the family the entire time until the doctors confirmed that things were under control and the woman and her child are fine.

This truly is a heartwarming tale and it was an incredible thing for the Jodhpur police to do. I, for one feel extremely safe, know we have soldiers like them manning the frontlines of this war against coronavirus.