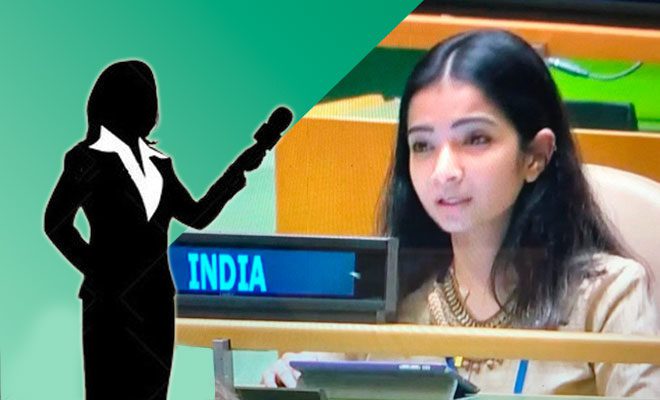 Sneha Dubey, The Young Diplomat Who Gave A Fiery Retort To Pakistan At UNGA, Is Winning Twitter Again

From the very beginning, the relations between India and Pakistan have been hostile. And the dispute over Kashmir is a never-ending one. What is new though, and has also taken the Internet by storm, is a speech about the issue from a young Indian diplomat that’s got everyone sitting up and taking notice. When Pakistan Prime Minister Imran Khan highlighted the issue of Kashmir while addressing the United Nations General Assembly (UNGA) in New York,  India’s First Secretary Sneha Dubey, gave an appropriate, fact-based response to it. Her speech is now going viral.

Who is Sneha Dubey?

Sneha is an IFS (Indian Foreign Services) officer, who has worked at the Ministry of External Affairs (MEA) as an Under Secretary. Prior to that, Sneha also was the Third Secretary at the Embassy for India in Madrid. In terms of education, she managed to clear the civil services exam in her first attempt, and has her MPhil in International Studies from Jawaharlal Nehru University, Delhi, after her graduation from Pune’s Ferguson College.

Why is everyone talking about her?

Recently, the United Nations General Assembly (UNGA) met, where Pakistan Prime Minister Imran Khan in his address to the Assembly brought up the issue of Kashmir. Sneha Dubey, India’s First Secretary, exercised the country’s right to reply and gave a rather befitting response to Khan. She hit out at Pakistan for sheltering and sponsoring terrorists for years now.

Sneha Dubey who also was the Third Secretary at the Embassy for India in Madrid responded to the Pak PM with all due respect and facts. In her response, she said, “Pakistan is an “arsonist” disguising itself as a “fire-fighter,” and the entire world has suffered because of its policies as “the country nurtures terrorists in its backyard.”

In her response to the President, the First Secretary of India, also emphasized that Pakistan as a nation holds the record for hosting large numbers of terrorists. Sneha further added that Osama Bin Laden, one of the most wanted terrorists of all time, had gotten shelter in Pakistan and to date, the Pakistan leadership glorifies him as a martyr.

As per reports, Sneha Dubey’s fiery response was backed by facts that are known to the entire world. She did not forget the mention of Jammu & Kashmir in Imran Khan’s address. And as a response to that, she clearly stated that the entire union territories of Jammu & Kashmir and Ladakh “were, are and will always be an integral and inalienable part of India.”

Have you heard that adage, speech is silver but silence is golden? Well, Sneha just proved this. We’ve seen politicians come on news channel debates or press interviews and give speeches that are longer than the ones they made where it mattered. There are countless examples of foot-in-mouth moments and unnecessary bragging on live television. However, when a very well known reporter tried to interview Sneha Dubey while she was in the ante-chamber, post her speech, Sneha gracefully and with barely any words spoken, showed the reporter the door.

*GET OUT* is the word! 🤣 pic.twitter.com/maE8AwNnuc

Denmark Prime Minister Postpones Her Wedding For The Third Time. She Prioritised Her Country And That’s Inspiring