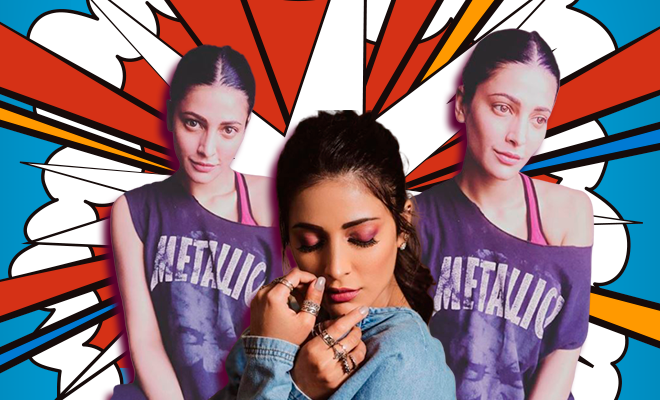 Shruti Haasan Spoke About Getting Trolled For Her Plastic Surgery. Why Are Our Bodies A Matter Of Public Discussion?

People are obsessed with what a woman does to her own body. Whether it is about her weight, how she chooses to dress, her decision to get pregnant or abort, her choice to have sex and even if she wants to go under the knife to change her appearance, people want to comment on it. Somehow, these things which are so personal to each one of us, seem like a matter of public interest. When I was really skinny, I was told to gain weight. When I became chubbier, I have been asked to lose weight. In fact, even my best friend very nonchalantly decided to point out my bloated belly when I sent her a video of me belly dancing. My sister is often asked by our relatives to make babies. We are always under scrutiny for what we do to our own bodies and I don’t understand why people think it’s okay to shout out their opinions on things that don’t matter.

In a society this warped where regular girls are subjected to all sorts, one can only imagine the kind of trolling celebrities face when it comes to their bodies and choices. We may not be very observant of the casual sexism in our society but we keep our microscope trained on any one that even mentions surgery. You know, so we don’t miss out on such a lucrative opportunity to hurt them. Sounds sadistic, right? Such people are unfortunately in abundance and celebrities are learning to not pay heed to them.

This time, Shruti Haasan spoke up about her hormone issues unhesitatingly. Haasan shared a collage of two pictures clicked three days apart. Honestly, I really couldn’t see the difference between the two so I don’t know what she wants us to observe. So let’s focus on what she wrote instead. “I’m not one driven by other people’s opinions of me but the constant commenting and she’s too fat now she’s too thin is so avoidable. These two pictures have been taken three days apart. I’m sure there are women out there who relate to what I’m going to say. Most often I’m at the mercy of my hormones mentally and physically and over the years I work hard to try and have a healthy relationship with it. It isn’t easy. The pain isn’t easy the physical changes aren’t easy but what’s become easier to me is to share my journey. (sic),” Haasan said.

She further revealed that she has gone under the knife and how she won’t let anyone else’s opinion of it bother her.  “No one famous or not is in a position to judge another person. Ever. That’s just not cool. I’m happy to say this is my life my face and yes I’ve had plastic surgery which I’m not ashamed to admit. Do I promote it? No am I against it? No – it’s just how I choose to live. The biggest favour we can do for ourselves and others is just be and learn to accept the changes and the movement of our bodies and minds. Spread love and be chill. I’m learning every day to love me for me just a little more because the greatest love story of my life is with myself and I hope yours is too 🙂 (sic),” she posted.

Even when Anushka Sharma had gone under the knife and returned with a terrible lip job, she was trolled left, right and centre. I mean it’s not like none of us never had a bad haircut. And honestly, most of these trolls would go under the knife if they had the money. Even if they wouldn’t, they don’t have the right to pull down someone who chooses to because it’s none of their business.

In an earlier interview, Shruti Haasan had poured her heart out on her alcohol addiction. “I was also unwell. I haven’t spoken about it but I had a medical condition. And you can’t talk about these things. People are always saying, ‘Shruti has become fat’. I was trying to heal myself. I stopped caring about what people were saying. I had to figure it all out. I took a one year break,” she revealed.

ALSO READ: Sania Mirza Posted A Picture Of Her Weight Loss Of 26 Kgs And Made Her Body-Shamers Eat Their Words

I believe that nobody can successfully shame you if you are not embarrassed of it. They can try and fail to pull you down and Shruti Haasan is doing a great job at owning it. But I know from experience that shutting someone down and shutting the voices in your head down aren’t the same things. She is learning to love herself, like all of us should. You’re worth it and don’t let anyone tell you otherwise.