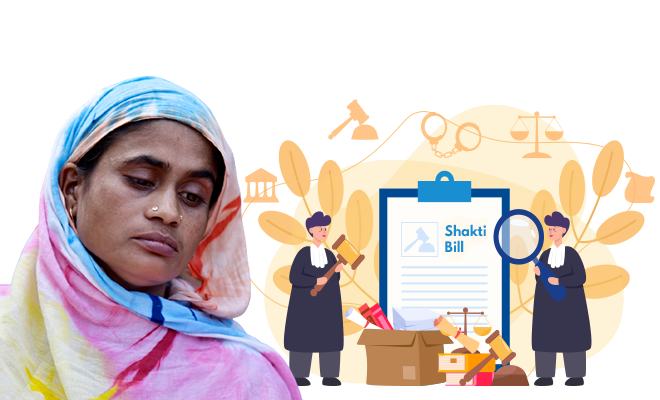 Looking at the state of women’s safety deteriorate everyday, with constant news of rapes making the headlines, especially in this period of a lockdown, the government after having registered enough cases gender-based violence to finally take some action that should have been preemptive, but we will take it at corrective. They came up with the Shakti Act Bill in Maharashtra, that will provide stricter punishments including a death penalty and fine up to Rs 10 lakh for crimes such as rape, acid attack and posting derogatory material on social media against women and children.

The bill shall also see special courts being set up for quicker and more efficient trials for such cases, where the proposed law states that investigators will have to complete probes within 15 days from the date of registration of offence with an extension upto 7 days.

And while, with the concrete measures being taken this time around, in order to ensure that no clean chit is handed to a person who has violated a woman, there are a few concerns that have arose with several women’s organisations that argue the bill to not help women, rather it ‘feeds into the patriarchal construction of consent and conduct of women’.

Implying that the law has been passed in haste, considering women organisations only received the bill on 10th December, which took away a lot of time from them to review and critique,  their stance is that the bill is a step backwards for women’s rights especially after the definition of consent under Section 375 has been changed.

Writing a letter, they have expressed their concerns to the media stating how the proposed amendment to Section 375, that says where parties are adults and the conduct of such parties from all circumstances surrounding the same appears that there was consent or implied consent, presumes consent, negates the entire definition of consent under the section and of rape itself. And we can see why that would be a problem.

Advocate Jaya Sagade, former vice-principal of ILS Law College, spoke on the matter and said, “It is well proven by research that it is not simply the stringency of the law but the certainty of being punished which is a better deterrent, and that stringent punishment is likely to give the accused the benefit of doubt, especially in cases of death penalty.”

Meanwhile, Manisha Gupte, founder of Mahila Sarvangeen Utkarsh Mandal (MASUM) said, “The draft bill does not empower women… in fact, there are many problems in the assumptions made. For instance, the first assumption is that rape is equivalent to death which it is not. It is a violation of human rights and a grievous physical assault with tremendous psychosocial complication and post traumatic-stress disorder. The woman does not die if she is raped and the first patriarchal assumption has to be questioned.” She also then stressed upon the fact that with such a punishment at the table, the judge would too think several times before admitting it was in fact a case of rape.

Kiran Moghe, president of the Pune Zilha Gharkamgaar Sanghatana was of the view that, “We find it extremely surprising that the Maharashtra government did not find it necessary to consult these organisations, or share the draft of the bill in the public domain. We strongly condemn this undemocratic method of functioning of the state government.”

From raising concerns over the meaning of ‘implied consent’, to disregarding the name of the bill ‘Shakti’, that reflects a stereotypically conservative and patriarchal perspective, the Shakti bill is being widely condemned by several women organisations.