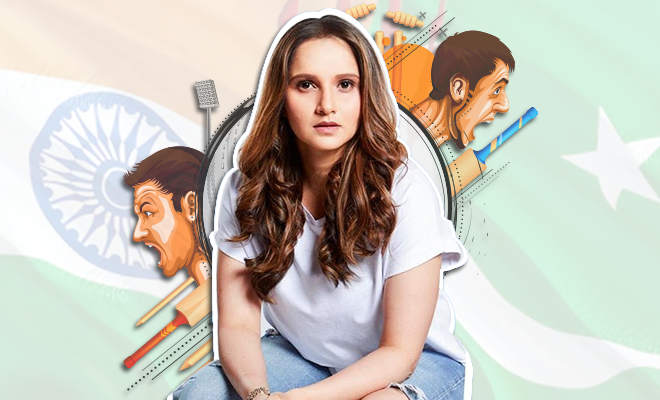 Sania Mirza Opens Up About How Women Are Blamed For Their Husbands Shortcomings In The World Of Sport. It’s True!

I have been thinking, why do we need gender stereotypes? Maybe our ancestors created them to ensure each person (male or female) stuck to a particular order to avoid confusion and anarchy. And for that period it makes sense, but not anymore. Now, these gender norms have become redundant and rigid barriers for what a person can and can’t do, can be done away with. Like sports, for example, is always affiliated with men and if a woman shows interest it’s a thing of surprise (sometimes, shock). Why? It makes no sense.

This is precisely why, even though I am not a sports fan, I have immense respect for sportswomen. They have fought so much to overthrow basic gender norms and stereotypes to reach where they are. In a heavily testosterone-fuelled environment, it’s not easy for a woman to be taken seriously and some of them like Mithali Raj and Saina Nehwal have done a brilliant job. The sad part is though, even after reaching the top of the pyramid they are still fighting to escape these ridiculous gender stereotypes. But just like everything else, people have only started taking notice of this very recently.

The whole reason I am talking about this today is that Sania Mirza, who is married to Pakistani cricketer Shoaib Malik, was recently asked about the “joru ka gulam” tweet she posted.  She posted it during the Women’s T20 World Cup in March. India was playing against Australia in the finals and Australian fast bowler Mitchell Starc missed a match of his own to come out and support his wife Alyssa Healy who plays for the Australian women’s cricket team.

Also Read: These Sportswomen Have Already Secured A Spot At The 2020 Tokyo Olympics. They’re Already Champions!

Sure thing !! God forbid it would be a guy from the subcontinent, the guy would be called a ‘joru ka ghulaam’ in one second 😅 good on you Mitchell 👍🏽 couple goals for sure!! #beentheredonethat 🤣 https://t.co/yl3ZlGFPkY

Yes, it’s all extremely adorable and it blew up on social media with everyone calling applauding this gesture by Mitchell. Sania Mirza was also one of those people who tweeted, “Sure thing!! God forbid it would be a guy from the subcontinent, the guy would be called a ‘joru ka ghulaam’ in one second. Good on you Mitchell. Couple goals for sure!!”

Deny it all you want but she is absolutely on point. If an Indian male cricketer had missed a match of his own to watch his wife play in the women’s cricket finals, there would be a chunk of the population entirely upset with that. Though, obviously, what they think is of no important.

You see, Indian sportsmen are revered while the sportswomen are treated like they are partially invisible. In their defence, sports is a “guy” thing, right? *rolls eyes*. Anyway, this was way back in March but Sania was asked about the quirky tweet a few days ago by two of our best women cricketers- Jemimah Rodrigues and Smriti Mandhana on their YouTube talk show, Double Trouble.

Regarding that question, Sania spoke about how women are considered a distraction by society. She started by saying, “It (The tweet about Mitchell) was funny because me and Anushka probably relate to this the most. I think whenever our husbands perform, it’s because of them, whenever they don’t perform it’s because of us. I don’t know how that works.”

I am sure Anushka Sharma relates to this a lot. How many times has she been blamed when her husband Virat Kohli hasn’t given his best on the field? Countless. Like Sania, I can’t figure this one out either. What’s the logic?  It’s also hypocritical. I mean, I don’t see Virat being blamed when one of Anushka’s movies flop.

It’s just that women, in general, are blamed for their husband’s shortcomings and that’s sexist and wrong on so many levels.

Also Read: A Female Reporter Was Shamed For Wearing A Tank Top During An Interview. When Will Women Be Taken Seriously In Sports Journalism?

Sania went on to say, “We are saying it as a joke, but I think there is a much deeper issue. The deeper issue is that a woman can always be a distraction and not a strength. That’s a cultural issue we have to deal with. Oh ‘if your girlfriend is there or your wife is there, he must be distracted because he is going out for dinner’. That doesn’t even make any sense.”

She further added, “When he (Mitchell) went back to his wife to watch the World Cup final and everybody was hailing him. I truly felt… I was trying to just picture Shoaib doing that for me… hell would have broken loose if that would have happened. They would have said… he is such a joru ka ghulam… he is going and watching a women’s cricket match. I just felt it. I feel humour sometimes brings the truth out.”

It’s no secret (anymore), that the sports industry is riddled with gender stereotypes and norms. But if you think about it every single industry is. Women take the fall for their husband’s inadequacies everywhere because obviously, the sky would fall if the men are blamed.

No matter what we do we just can’t catch a break and bearing the brunt of everything is starting to get extremely tedious. If you can’t appreciate women, at least don’t hide behind norms and stereotypes to belittle us.