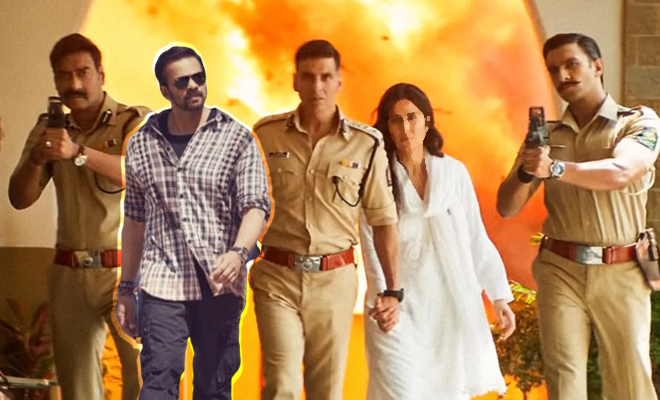 Rohit Shetty Apparently Told Katrina Kaif No One Would Notice Her In A Scene In Sooryavanshi. That’s Because You’re Using Her As A Prop

If you’ve been watching Bollywood long enough, you know that for a long time, women played the role of furniture. Which means they existed in the background, making the entire set up look pretty and giving the heroes and the male audience something to ogle at but had not much to contribute in terms of presence. Because you really don’t want a woman to interrupt the proceedings in a movie with a dialogue or something.

Now, you would think that over time, this has changed. Bollywood is opening its eyes to the fact that women can actually be in the movie and say important things. And it might work. It was a shock as much for the film makers as the audience. Slowly but surely, we were witnessing movies with strong female leads with action scenes, important dialogues and even movies that were being shouldered entirely by women.

But that’s only a certain kind of cinema. Because there is the Rohit Shetty universe- the one where cars go flying, humans go flying, inanimate objects go flying – where women continue to exist only on the fringes. They are there in the film but they open their mouth only to lip sync to songs or make a play for the hero’s affections. And in a movie where testosterone is available by the truck-loads, who even needs the women, right?

ALSO READ: 5 Thoughts I Had While Watching The Trailer For Sooryavanshi. One Of Them Definitely Was Where is Katrina Kaif?

Rohit Shetty, because he is an air head and has zero respect for women, apparently told Katrina that no one would notice her in a shot featuring the three lead men – Ranveer Singh, Akshay Kumar and Ajay Devgan – and her walking straight into the camera. We want to say but that’s the whole trailer but we will stick to talking about this particular instance. Rohit Shetty said and we paraphrase that because there was so much machismo on screen with the men and the blasts and all that, no one would even notice Katrina Kaif. This caused Twitter to go bonkers, reasonably so and #ShameOnYourRohitShetty started trending.

Rohit Shetty is the classic example of a sexist mysoginist man who would never let a woman succeed even when she wants to do better at work. She’s the most hardworking self made women in the industry and deserves utmost respect ! #SHAMEONYOUROHITSHETTY pic.twitter.com/P61O3JwuiQ

How dare you Mr. Rohit Shetty? I always knew you were like this only, you should be thankful that she agreed to work with you. But I'm not going yo call you shit. #SHAMEONYOUROHITSHETTY https://t.co/sxgdYwX9QR

We can’t even wrap our heads around this. Anyway, Katrina came to his defense because he sounded like a complete asshat to say that the entire quote was taken out of context. Katrina, the entire quote is there! That’s his whole answer. She went on to say how she had blinked during the scene and that Rohit Shetty had said no one would notice her blinking. Erm, we wouldn’t notice anyone blinking Katrina. But that doesn’t make his comment less asshole-y.

Don’t jump to his defense.

We want to go on  rant about how women are treated in movies that are high on the masculinity but we just can’t be bothered. This is just a sham.

Throwback Thursday: Maine Pyaar Kyun Kiya Is About A Pathological Liar And Women Who Have No Standards When It Comes To Men