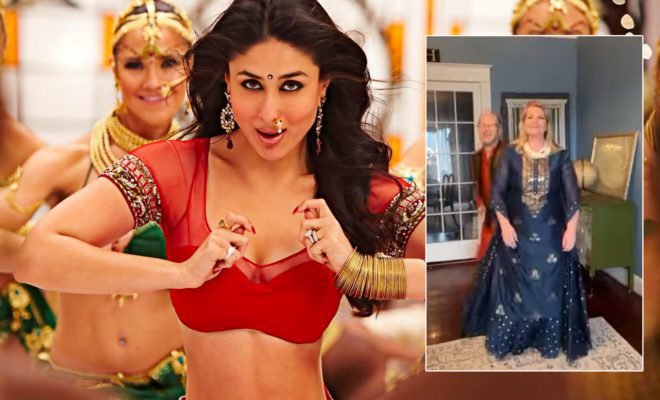 American Couple Grooves To ‘Chhammak Chhallo’ To Celebrate 25th Anniversary. Their Steps Are On Point!

Okay, so truth be told, one of my all-time favourite guilty pleasures is to watch non-Indians dance to Indian songs. It’s amazing to see that even when they don’t understand the lyrics, they still manage to put all their heart and soul into it. And I have to say, it’s the most adorable thing ever. I mean, have you seen the videos from Ricky Pond? The American man, famous on the Internet as Dancing Dad, broke the internet with his grooves on the Bhojpuri song ‘Lollypop Lagelu’ and the Telugu hit ‘Butta Bomma’. Well, he is back with yet another dance number. And this time, he and his wife are dancing to the Bollywood song Chhammak Chhallo, from Ra.One, that featured Shah Rukh Khan and Kareena Kapoor!

Recently, the American social media sensation Ricky Pond went viral again for one more of his dance videos. In this latest video, posted on Instagram, he and his wife were seen grooving to the Ra.One song Chhammak Chhallo, sung by Akon and Hamsika Iyer. The dance routine was prepared in order to celebrate their 25th wedding anniversary!

The video is rather adorable. Both Ricky and his wife, Roxanne, are seen in Indian wear; Ricky is dancing in a kurta-pajama, whereas his wife has donned a kurta and ghagra. Both of them danced their hearts out to the Bollywood track!

Netizens have showered love, appreciation, and blessings for the couple in the comments. And honestly, it is one of the cutest videos out there.

Just earlier this month, on Independence Day, Ricky Pond shared a video of himself dressed in Indian wear, and dancing to Chak De! India.

And before that, he even collaborated to create a reel on the song Param Sundari, from Kriti Sanon’s Mimi! Look at him nailing those steps!

We love his love for Indian songs and we hope we see the couple put out more such videos!

This Groom Fell Asleep On The Wedding Stage While Sitting Next To His Bride. Uh Oh!