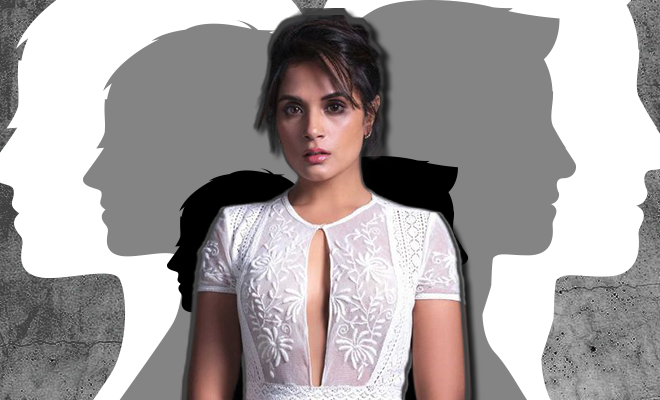 Look, I am not saying all men, but a large chunk of the men in country are delusional. And I mean this in the nicest way. They think that their wives have easy lives sitting at home and handling a household. They snidely remark that their female boss is there because she probably slept her way to the top. They think they are supporting women by telling them what to wear. So, yeah, the men live in their own bubble and most of them are unwilling to burst it. So when Richa Chadha commented saying the only the men think the women are safe, it was like she stole the words right out of our mouth.

Known for voicing her opinions on various serious societal issues, here she is again urging people to look into the increasing number of sexual assaults on women and other crimes and we totally stand by her.

In conversation with PTI, the Love Sonia actress talks about how unsafe India really is for women, even in the womb and the only people who disagree with this fact, are men. She says, “There is no patriotism in hiding that India is unsafe for women. India ranks very high on violence against women. There are number of cases of female foeticide, genital mutilation and acid attack. There are so many rape cases that go unreported because of social stigma and it makes the situation worse for the victim. Rapists are a product of society. So on what basis can one say that it is a safe place? People who say India is extremely safe for women, are men.”

She goes on to say that change needs to come from both sides, the government and society. Though the laws are strict, the implementation of said laws is worrisome. “Change is needed both ways (government and society). There has to be social level change. There should be a no-tolerance policy against sexual harassment. Laws are powerful but the implementation of it is another debate. There are so many rape cases that go unreported because of social stigma and all this makes the situation difficult for the victim. Rapists are a product of society,” said Richa.

Her upcoming movie, Section 375, is all set to hit theatres on 13th September. Richa will be seen portraying the role of a lawyer fighting to get justice for a girl who has accused a celebrity of rape. She is seen starring opposite Akshaye Khanna in this movie who plays the character of a defense lawyer.

The Panic Button In On Your Taxi App May Not Be Entirely Safe Or Helpful. These Women Found Out First Hand(Opens in a new browser tab)