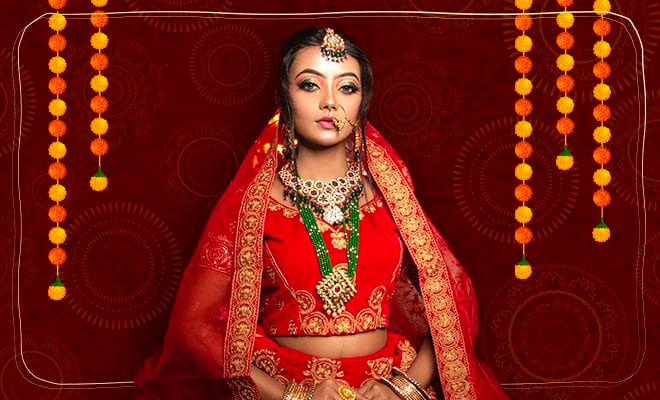 Bride From Rajkot Puts Off Wedding Time To Appear For Examination. Education First!

This bride has her priorities straight. From her perspective, appearing for a university examination is much more important than her own marriage ceremony and we couldn’t agree more. Shivangi Bagthariya shocked everyone when she entered the examination hall in her wedding attire. Bagthariya along with her husband appeared at Shanti Niketan College in the morning to take the exam of the 5th semester of BSW (Bachelor of Social Work). Now that’s what we call a match made in heaven!

The bride from Gujarat wrote her exam in shimmering red sari and bridal jewellery. For sure, it was an interesting change for all the other students. As per reports, both the families supported Shivangi’s decision of appearing for the examination on her wedding day.

Shivangi Bagthariya informed that when the dates of her wedding were finalised, the examination schedule was not declared. Therefore, the time of the marriage and examination date clashed with each other.

Also Read: This Bride Did Push-Ups Fully Decked In Her Bridal Outfit. We Love This

“I asked my parents as well as my would-be husband’s family to tweak the muhurat so I can take the exam, ” she told TOI. The two families too supported their children’s decision. “Education is a must for all, including women. Parents and girls should give importance to education,” Shivangi further added.

Shivangi Bagthariya’s husband, Parth Padaliya who also appeared in the examination is a resident of Surat. Shivangi will move to her in-laws house only after completing the examination. This bride deserves a standing ovation for not neglecting her education!
Women are always supposed to be selfless and sacrifice themselves and their happiness for others. And often, when they do this, their own hopes and dreams and ambitions  So stories like this, where the woman prioritises herself over everything else brings happy tears in our eyes!

In Karnataka, A Muslim Family Sponsored A Hindu Girl’s Wedding And Also Helped Her Family Through A Financial Crisis