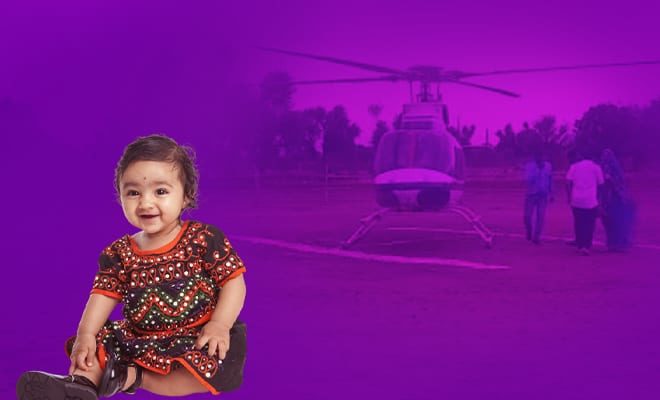 At a time when women are conquering the skies, shattering the glass ceiling and sitting with the big dogs on the table, one would think that the era of the women has arrived. And while it so may be the case in quite a few places around the world, there still remain towns and cities where women are just beginning to be accepted. Like in the Nagaur district of Rajasthan, where a family has welcomed its first daughter in over 35 years.

Marking the auspicious day with grandiosity, this family in the Nagaur district of Rajasthan did not leave behind any stone unturned to announce to the world that they have welcomed a baby girl in their family. And the way they did it was by making her grand entrance in a helicopter!

Costing them 4.5 lakhs, the big day was marked by the village folk of Nimbdi Chandawata in Nagaur district with a flower shower as she was being brought in, while the people around sang bhajans and celebrated the birth of a little girl with so much happiness. And honestly, for a moment it felt like it was all too good to be true.

Also Read : Studies Predict That India Will Have 6.8 Million Fewer Girls Being Born By The Year 2030. Because We Continue To Kill The Girl Child

30 km in a helicopter for the love of girl child! This family in #Rajasthan built two helipads and spent about Rs 4,50,000 just so that they could bring the newborn child home in a helicopter. @asnaniraajesh https://t.co/JVRV681cR1

The little girl who is named Riya, was born at her maternal grandfather’s home almost 2 months ago, and was brought to the her paternal home only recently on the auspicious day of Ramnavami. It was remarkable to see, that in a society that has always been fond of and celebrated the birth of a boy child, the news of a girl being born after 35 years in a family was so well received and celebrated.

After the wish of the family to have a girl was finally fulfilled, Riya’s grandfather  took permission from the district collector to fly her in a helicopter and the authorities complied. They also allowed the family to build helipads both in Riya’s maternal and paternal villages, and the fact that they agreed to putting in these efforts to welcome the birth of a girl was heart-warming.

The father of girl child spoke about it and said, “By bringing my two-month-old daughter in a helicopter, we want to tell everyone that the birth of a daughter is an occasion that should be celebrated like a festival. Instead of feeling sad, we should all be happy when a daughter is born.” Words that all of us need to bookmark in our brains.

With a band, flower-shower and eager and happy people waiting to receive her when she landed, it was truly a sight to behold. Guess, times really are changing, and we are here for it!

Also Read : In Delhi, This Girl Ran Away From Home To Escape Child Marriage, Is Found 4 Years Later Pursuing A Nursing Course