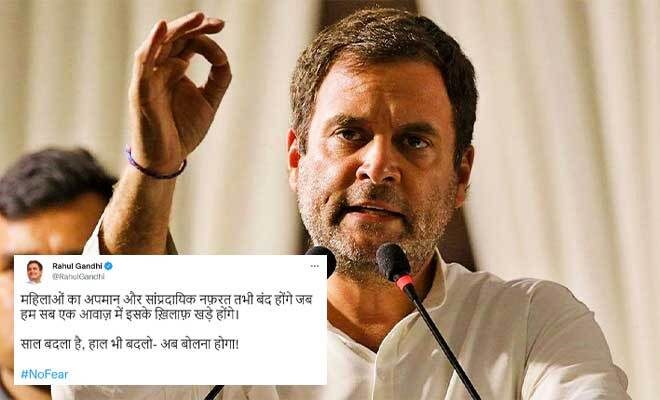 One of the oldest tricks in the book to target and control women is using doctored pictures of them for inappropriate purposes. And this dirty trick has been used once again to defame, shame, and disrespect Muslim women. First, it was the Sulli Deals app that used to use morphed images of Muslim women with an intention to objectify and shame them; and now there are a different group of unidentified cybercriminals who are using a different name – Bulli Bai app – to do the same thing all over again. In the Bulli Bai app, manipulated pictures of Muslim women are posted and it even holds auctions for them. Needless to say, there were numerous posts calling out this ridiculous app. And one of the posts amongst them was of the Congress leader Rahul Gandhi. Rahul Gandhi took to Twitter to urge people to raise their voices against the insult of women and communal hatred.

On Sunday, Rahul Gandhi, Congress leader, took to Twitter to urge people to raise their voices against the insult of women and communal hatred. He said that this was the time to speak up about it and only then we can hope for any kind of change. His tweet was with regard to the Bulli Bai app that auctions Muslim women using their manipulated pictures.

Rahul Gandhi tweeted, “The insult of women and communal hatred will stop only when we stand against it in one voice. The year has changed, the situation should also change. It is time to speak up.” His tweet came at the time when people and groups on the internet were expressing their outrage over the Bulli Bai app. The defaming app has pictures of at least 100 influential Muslim women that are auctioned off.

Also Read: After ‘Sulli Deals’ Yet Another Outrageous App ‘Bulli Deals’ Pops Up To Auction Muslim Women Once Again In A Bid To Harass Them. This Is Sick!

In fact, Rahul Gandhi was not the only one who spoke up against the Bulli Bai app. Priyanka Chaturvedi, Shiv Sena MP, on Saturday, tweeted about it and flagged the app to Mumbai police and the Union IT Minister Ashwini Vaishnaw. She even asked them to take strict action against those behind the app.

I have repeatedly asked Hon. IT Minister @AshwiniVaishnaw ji to take stern action against such rampant misogyny and communal targeting of women through #sullideals like platforms. A shame that it continues to be ignored. https://t.co/Q3JLxZpNeC

As a response to her tweet, Ashwini Vaishnaw, IT Minister, said that GitHub, the platform that hosted the app, has blocked the user and the CERT, as well as police authorities, are working together to take further action. In another tweet, he wrote that the government of India is working along with Delhi and Mumbai police authorities on this matter.

What is even more shocking and frustrating is the fact that this is the second such case that has been registered in less than a year. Honestly, I agree with Rahul Gandhi. It is time we raise our voices against this kind of cyberbullying and shaming of women based on their community.

Nusrat Jahan Seeks Legal Action Against A Dating App That Used Her Picture Without Consent. How Hard Is It To Understand The Concept Of Consent?