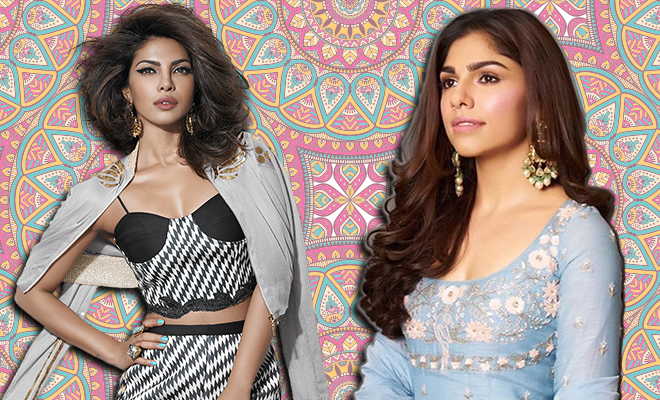 There are certain roles in Bollywood that a few select actors might as well get patented to their name, for that is how good they were in that role. They owned the role, so that when we think of the character, we automatically associate the actor’s name with it. Namely, Kareena Kapoor for showing us the human side of women in sex work,  Deepika Padukone for let tting her eyes do all the talking in Padmavaat, and Priyanka Chopra for absolutely nailing the role of Bajirao’s wife in Bajirao Mastani. From the nuances to the look, Peecee looked absolutely smashing

So naturally, when Sanjay Leela Bhansali was looking to give his niece Sharmin Segal a maharashtrian avatar for his upcoming movie – Malaal, PeeCee had the best advice to offer. In what was an uber-sweet gesture, she suggested her very own makeup artiste – Uday Shirali to deliver on the task.

A source revealed that Uday, who has worked with Priyanka for many years, was suggested for the young actress. Sharmin sports a navari saree and nathni. Asha Ganpat Malpekar had earlier created the traditional drapes for Priyanka during Bajirao Mastani, and has also dressed Sharmin in this song.”

Looks like the global icon may be working outside India at the moment but India is never out of her mind, as she continues to be there for the industry in all her grace and might.

Sharmin Segal, Bhansali’s niece who will be seen romancing Javed Jaferi’s son Meezan Jaferi in Malaal, has earlier worked as an assistant director in movies like Mary Kom and Bajirao Mastani also said, “(Uday) knew how to provide the best look for this song. The saree is similar to the one Priyanka wore in Pinga, and in the film Kaminey.”

Sharmin also revealed how she felt comfort in the fact that she was being mentored by Bollywood’s most successful actress and we couldn’t agree more. A little guidance never hurt nobody, especially at the hands of Priyanka Chopra Jonas no less, who’s always been kind and grounded in her conduct.

On the work front, Priyanka has been at the receiving end of barbs from Salman Khan for leaving Bharat but she’s been really graceful about the whole not hitting back or commenting on the incident. She did make a cool passing mention though, and we thought it was quite neat.

As for us, we can’t wait to see Malaal hit the screens and spread some of that Sanjay Leela Bhansali magic!