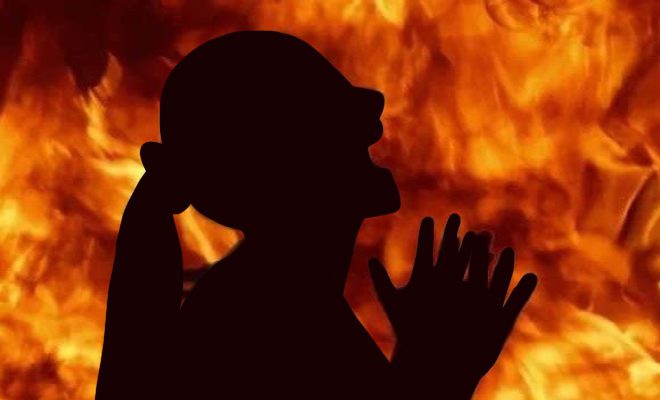 In Telangana, A 22-Year-Old Pregnant Woman Loses Twins After Mother-In-Law Sets Her On Fire

You know, most people, including women, treat women as an object and it’s a fact, not an opinion. The world is full of misogynists who can cross any limit in causing mental or physical hurt to women, it’s disgusting and blood boiling. In Telangana, a pregnant woman was reportedly set on fire by her mother-in-law and lost her twin babies after she had to undergo an abortion. This is so sad and disturbing, to be honest!

On July 17, a 22 year-old-woman from the Nizamabad district of Telangana, was allegedly set on fire by her mother-in-law. The victim has suffered 50 per cent burn injuries and is battling for her life, she had undergone an abortion after she suffered burns and lost her twin babies. According to the reports, the 22-year-old woman identified as Keerthana and her mother-in-law used to fight often as she refused to work in the family’s agriculture field. She along with her husband – Pandari shifted to Hyderabad to look for work and avoid family issues around six months ago. However, they both went to their hometown to repair relations with the accused but she poured petrol on Keerthana and set her on fire when she was working in the kitchen.

Also Read: A Meta Study Shows That Facebook Has Less Female Users Because Of Online Harassment

Family members along with their neighbours rushed to her rescue after hearing her screams and doused the fire. The pregnant woman was immediately rushed to Nizamabad hospital where doctors conducted an abortion after she suffered serious burn injuries. On July 20, she was taken to Hyderabad for better treatment but she is in critical condition, said police.

As for now, the Police have booked the woman’s husband and her mother-in-law on charges of attempt to murder and domestic harassment. They have also arrested Keerthana’s mother-in-law while her husband -Pandari, who is with her at the Hyderabad hospital is yet to be arrested. Delhi Government To Bear 50% Cost To Train Women As Commercial Drivers. This Is Such An Empowering Move