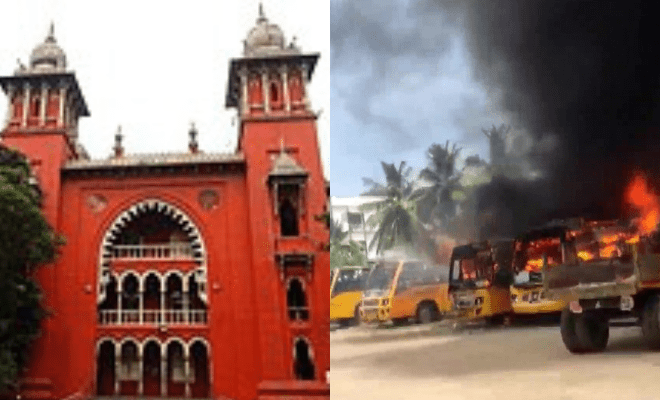 Losing a child can be painful and traumatic. And almost any type of adverse reaction to such trauma is understandable. Yesterday, we read the news of a Tamil Nadu schoolgirl committing suicide due to harassment in school by teachers. The relatives of the girls started protesting and asking for justice for her which escalated to a complete riot. There have now been updates on the case, read more to find out.

The father of the Class XII student has petitioned the Supreme Court with a request that the panel conducting the second round of post-mortem examinations include a doctor of their choosing. The family of the girl has asked for an immediate hearing on the subject. It has been announced that the Supreme Court will hear the case tomorrow. As soon as it was discovered that the girl’s parents couldn’t be reached for the post-mortem examination, the state government of Tamil Nadu contacted the Madras High Court. They were instructed by the high court to conduct the autopsy without the parents’ presence. If the parents showed up, the court instructed the police to allow them to attend. A senior police officer stated that they have asked the dean of Kallakurichi Medical College to do the post-mortem.

Tamil Nadu | Violence broke out in Kallakurichi with protesters entering a school, setting buses ablaze, vandalising school property as they sought justice over the death of a Class 12 girl pic.twitter.com/1id0U9jVUW

Also Read: Why The Suicide Case Of A School Girl Sparked Tension In Tamil Nadu’s Kallakurichi?

The girl appeared to have died from haemorrhage and shock as a result of several injuries, according to a post-mortem performed on July 14. The high court ordered a second autopsy on the Class 12 student on Monday at the request of her father, P Ramalingam, who claimed that there had been foul play. The second post-mortem, according to Justice N Sathish Kumar, must be performed by a group of three doctors selected by the court and must be documented on camera. The autopsy was open to the father and attorney of the girl. Later that day, Ramalingam requested that a doctor of his choosing be added to the autopsy panel, but his request was denied by the high court’s division bench.

Additionally, after the suicide went public, the Superintendent of Police and the Collector of the Kallakurichi district were both transferred by the state administration. P Pakalavan has been named the district’s new SP, and Sravan Kumar has been named the new Collector, according to sources.

After Raping Her For Months; Father And Son Sell Woman For Rs.60,000