Neha Dhupia Gets Trolled On Her Birthday With Fragile Men Constantly Branding Her A Fake Feminist. How About We Learn To Move On? 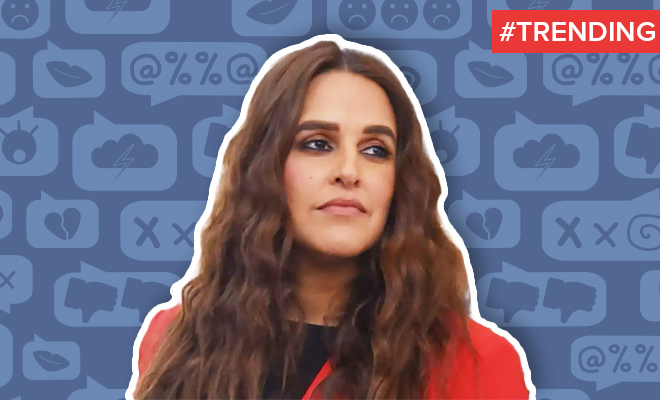 The word ‘pseudo feminist’ or ‘fake feminist’, is bandied around casually by a lot of people but we are seeing that this is the nomenclature that men hide behind when they don’t know where to place a loud, opinionated woman. She doesn’t have to be a celebrity but in this case, she is famous and she doesn’t listen to men who want her to be quiet, so she’s often dismissed by keyboard warrior men as someone who is a pseudo feminist.

Actress and reality show judge, Neha Dhupia had come under the scanner a couple of months ago, after she dropped a rather controversial reaction to a contestant on the hit show Roadies. The guy was talking about slapping a girl after he found out she had cheated on him with several men. You see, at the surface the matter looks pretty black and white, he slapped a girl, and Neha Dhupia slapped him with criticism for doing so. Except, it wasn’t all that simple. Yes, the fact that a man excused himself with the liberty of getting violent with his girl was wrong, but Neha Dhupia, in a rage of fit, ending up justifying the woman’s ‘choice’ to cheat on him with 5 men. And that was just one incident.

The matter blew up like a volcano almost as soon as the episode aired and the video went viral. Dividing the internet, people were excited to use this to call her out on being a pseudo feminist, a hypocrite and even giving her death threats because why not? Even back then, people chose to ignore the real debate of whether or not it was okay for the guy to slap the girl, and turned the tables on Neha. And today, on her birthday, seems like the internet has still not been able to let go.

Meanwhile neha dupia looking at trollers trolling the one who started it #NehaDhupia pic.twitter.com/22Ny18etOy

Flooding  Twitter with angry, satirical and cruel tweets, all of which brutally troll her, users have once again dropped everything they were doing to open up old wounds.

Not only have these tweets been insensitive, but also unnecessary. And mind you, most of these were from men, who clearly couldn’t handle the fact that a woman, ON TV,  was wound up about violence. They constantly choose to be unforgiving of the one time they found a loophole in this woman’s speech. And that’s the problem we have with such men. Rather than being mindful of what they utter, after thrashing a celebrity for what they said, these men have taken it all too personally. These are possibly the same men that go around flashing placards saying #NotAllMen when incidents of rape turn up.

What is it about Neha Dhupia’s demeanor that rankles these men so much? Why is their masculinity so fragile that they do not even consider the violence of that episode but hanker after Neha’s blood for saying something that was entirely pulled out of context?

So much so that they felt threatened about what she had to say, even after she came and clarified where she was coming from. Well, we only have one thing to say to such man-children, that sometimes it is okay to move past things and not stick to them like an obsessive love. For once maybe, learn the art of letting go, without slamming a person for what they did in the past. On their birthday, no less.

Also Read : Neha Dhupia Is Such A Trooper. She Took Her Roadies Trolls Head On With Her Anniversary Post And We Think That’s Sassy