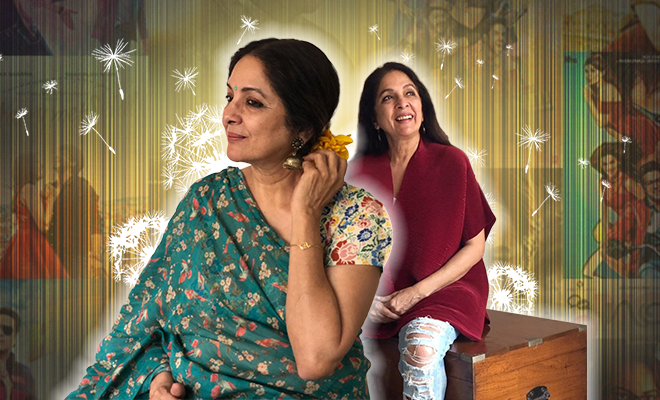 Neena Gupta Says She May Not Even Be Alive By The Time Older Women Get Lead Roles In Bollywood. We Agree, This Isn’t Happening Soon

They often tell me, age is just a number, but what they most conveniently forget to fill me in about is that for women age is pretty much the deciding factor for almost everything in life. From the age of 21 when they start getting pestered for marriage, to when they take on managerial positions, we are always measured in terms of our age and Bollywood is no different. While male actors continue to rake in big bucks while landing plum protagonist roles even in their 40s and 50, women as soon as they bear a child or turn over 35, are cast aside for roles or relegated to side roles. But even then, coming through as hope are veteran and still relevant actresses like Neena Gupta who have been breaking stereotypes about making it big in the industry.

In a recent interview with the Indian Express during the launch of her maiden audio show Ae Dil Hai Complicated on Audible Suno, the Badhaai Ho actress talked about her struggles before and after she entered the industry and also about how she may not be as unconventional as people peg her to be. Talking about the latter, she said, “Just because I have a daughter doesn’t mean I am unconventional. I am very conventional. That’s the image the media has created. I still have a balti bath. I still use Margo soap and neem toothpaste. I still put coconut oil in my hair. I don’t use any chemicals on my face. I don’t use a moisturizer. I eat ghee ki roti. This is not unconventional.” And we can’t help but agree with her there. People have a way of making unconventional sound as something that challenges society’s norms and we are glad that Neena Gupta is bent on making us realise otherwise.

Also Read : Neena Gupta’s Instagram Game Is So On Point. She’s Clearly Not A Boomer

Having a child out of wedlock is just as fine as having a child in a marriage, and if her family is any proof, she seems to be doing pretty great as a single mother. Talking about the kind of stereotypes she has had to break, she said, “Yeah. It’s like after Badhaai Ho, everyone wants to give me Badhaai Ho type roles. That ‘middle-class UP’ person. I want to do different types of characters, but it’s okay. I am still very happy with what I have got. I am very thankful that I have got it now. Better late than never.”

She even mentioned how even though she was headlining the movie Badhaai Ho in terms of script and the central role, the film wouldn’t have done half as well as it did without Ayushmann or Sanya in the film. She said, ” Yes, but if these two weren’t there and the film was made only with Gajaraj and me, it wouldn’t have run at all. That’s the truth and I cannot do anything about it. Even then you need youngsters to pull it through. That’s how we are. It will take a lot of time to change (the mindset). I might not be even alive.”

When questioned about the one prejudice against women that Bollywood may never be able to shake off, she gave an answer that rings true in every aspect. “This question is wrong because our society is itself prejudiced against women. So, why criticise only film artistes? A film will reflect the beliefs of the society. And what’s a woman’s role in society? Taking care of the house, the kids and serving her in-laws. So, the films will also be made accordingly. If the society changes, the films will change,” said Neena Gupta, and we agree. The movies are a depiction of the way we lead our lives, and for years on end, women have been reduced to mute spectators as men go ahead and take leaps.

Till the time the society and the industry changes its thinking about women, nothing is really going to change. And even we may be too old to see it through. But until that happens, we are glad that women like Neena Gupta are here to do their bit.

Also Read : Neena Gupta Talked About Ageism In Bollywood And She’s So Right. We’ve No Idea What Rangoli Is Talking About Though