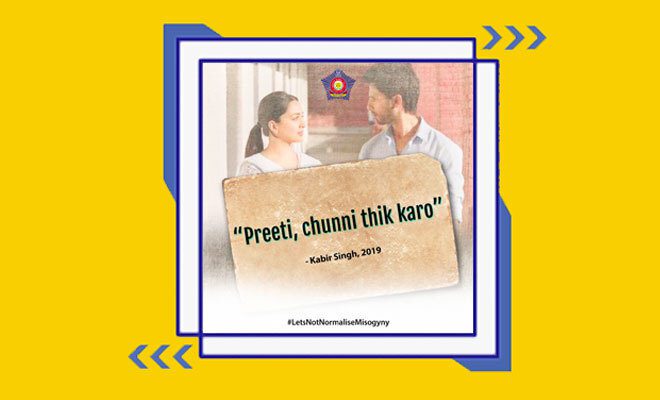 One of the most fun pages to follow on social media is the Mumbai Police profile (according to me, of course). I mean, have you ever seen the sass and creativity with which they address issues? I’m a fan, especially after the Khaki Studio released their version of Bella Ciao from Money Heist! And just like always, they’ve managed to come up with creative posts that openly condemn misogyny by taking help from and taking on Bollywood! In their latest posts, the Mumbai Police account makes an appeal to denounce misogyny, calling out dialogues from movies like Kabir Singh, Dabangg, Dil Dhadakne Do and more. Honestly, I’m loving it!

Bollywood has time and again been criticized for being sexist and promoting misogyny on the big screen. They have churned out stereotypical movies where women are being objectified or treated as subservient to men or having no agency of their own. And in doing so, they’ve fuelled the pre-existing misogyny in the society. In an effort to discourage that, Mumbai Police took to social media and posted several misogynistic movie dialogues and asked the netizens to “use every word thoughtfully.”

Also Read: Mumbai Police Just Posted A Meme Using Alia Bhatt To Keep People Off The Streets Amid This Lockdown. Their Social Media Game Is On Point

Mumbai police shared the movie dialogues with the #LetsNotNormaliseMisogyny, #MindYourLanguage, and #WomenSafety. Each of the dialogues that they’ve chosen from these Bollywood movies highlight misogyny in various aspects and how they send the wrong message to society about treating women. A very astute and timely message to put out, considering crimes against women have never not been on the rise.

Cinema is a reflection of our society –

Here are (just) a few (of many) dialogues both our society & cinema need to reflect upon.

Choose your words & actions with care – unless you want the law to intervene! #LetsNotNormaliseMisogyny#MindYourLanguage#WomenSafety pic.twitter.com/Shro2v9Qvx

Mumbai police shared their movie dialogues with the caption, “Cinema is a reflection of our society – Here are (just) a few (of many) dialogues both our society & cinema need to reflect upon. Choose your words & actions with care – unless you want the law to intervene! #LetsNotNormaliseMisogyny #MindYourLanguage #WomenSafety”

And just like their other posts, even this one got over 30,000 likes in an hour of being uploaded. More often than not netizens have always praised the Mumbai police social media team and this time was no different. The fact that they addressed such an important issue with such creativity is truly commendable.