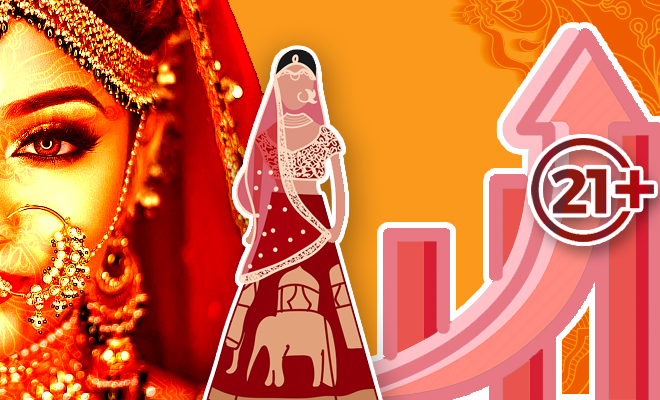 More Women Are Getting Married Later, According To The SRS Of India. But Child Marriages Are On The Rise. This Is Worrying

There’s nothing better than waking up to a news that indicates the betterment of women in the country. Be it the hanging of Nirbhaya culprits (finally after 8 long years) or an announcement of a law that would mean that our security and well-being is going to taken care of, atleast in theory. Recently, the information released by the Sample Registration System (SRS) of India stated that the mean age of marriage of women has increased substantially. On the surface, that is great news. It would mean that child marriages are on the decline, that women possibly develop a voice before they are married off and more. But after doing a little more research, this might not be entirely true.

Surely, there has been a very slow but constant improvement in the average age of marriage and that’s good news. But what perhaps isn’t as encouraging is that a deeper look at the statistics reveals that not much has changed at the grassroot level.

Also Read: The Number Of Child Marriages Has Gone Up Significantly. Girls Are Being Married Off Due To Poverty And Because They’re Seen As Liabilities

The survey shows that the percentage of women who are married before even turning 18 years of age in rural areas and nationwide stands unchanged at 2.6% and 2.3% respectively. However, the percentage in urban areas this figure has seen a small decline from 1.7% in 2017 to 1.6% in 2018. So, that means even if the mean age of marriage of women has shown an upward trend, there is in fact no improvement of women who are prematurely married off in the rural areas and overall. And, wasn’t that the whole point? *shaking my head*

Looking at it state-wise, the mean age in Jammu & Kashmir is the highest with 26.7 years while the lowest mean age was recorded in West Bengal at 20.9 years. West Bengal also happens to have the highest percentage of women married under 18 years at 3.7%. Kerala has the least percentage of underage marriage of women at 0.9%. Tamil Nadu (), Telangana (1.8%) and Karnataka (1.5%). Some other south indian states that have recorded lowest percentage of underage brides at 1.9%, 1.8% and 1.5 %, which is lower than the national average (2.3%).

India continues to be haunted by underage marriages: Over 500 cases of child marriages reported since mid-March in Bengal https://t.co/Gmr6FOO5Zb via @ThePrintIndia

Also Read: The Government Is Considering Moving Up The Legal Marriageable Age For Girls In India To 21. But Only For Motherhood, Not So She’s Emotionally More Mature

What’s worse is that the nation capital has shown a rather disappointing result. In 2017, New Delhi registered the least percentage of women who married before 18 at 0.4% but in 2018 it showed an increase and now stands at 1.3%. Seriously, where are we headed?

Let us also remind you that earlier last month, there were talks about a task force being appointed by the government with an aim to change the legal age of marriage from 18 to 21 for women. However, sadly, the motive behind it is concerns regarding motherhood and maternal mortality rate and not making the women self-sufficient, educated and independent before they are married off. Clearly, India has miles to go and people need a more progressive mentality and educational intervention to improve the situation before we can truly celebrate the upward trend in mean age of marriage of women.

In China, Couples Are Rushing To Get Married Post Lockdown Causing Their Application System To Crash. Maybe This Will Make Everyone Commit