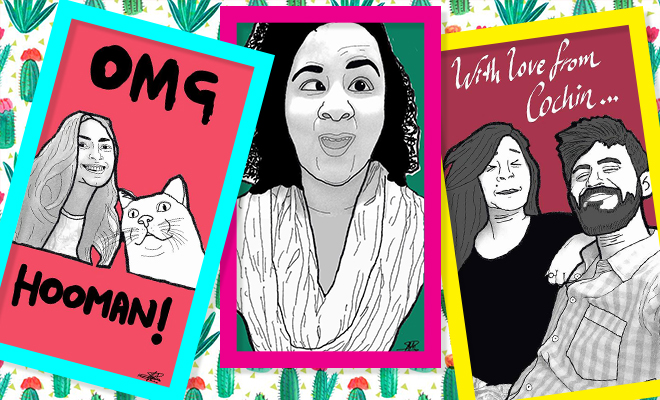 Meet The Architect Who Turns Snapchat Selfies Into Sketches

Doodling is something of a trend now and has even taken social media by a storm. Not too long ago, we wrote about the Chic Sketch app, which turns your outfit photo into a cute fashion illustration. Now, there’s another fun addition to the doodling party in the form of Mumbai-based architect Sai Prateek Narayan, who has become something of a sensation on Snapchat recently.

Recently, Buzzfeed India featured Sai in a story talking about how he’s been turning people’s Snapchat selfies into hand-drawn sketches. How fun is that? So we decided to get in touch with the doodler to get more deets. Sai told us that the way this works is you send him a selfie on Snapchat — it could be anything from a mug shot to a selfie with your pet cat — and he’ll go ahead and sketch it out in a fun way for you within the hour.

However, ever since the Buzzfeed feature, he’s been flooded with new requests that have overwhelmed his feed so he’s temporarily disabled his Snapchat ID and requests that you get in touch with him on his Facebook page instead. Sai says he makes these sketches on his Samsung Galaxy Note 3 and adds fun colours or texts if he thinks it’ll add a dose of fun to your image.

The architect started sketching when he moved to Mumbai last year, and usually displays his work — including the Snapchat selfies and some inspirational artwork — on his FB page. He started doing these sketches for random Snapchat users in December, when a friend inspired him. Now, thanks to the overwhelming response he’s gotten for his work, he plans to only take requests a couple of days every month so that he can balance this side project with his full-time job. The best part? The artist doesn’t charge a penny for the sketch because it’s a hobby he loves to indulge in, with the added bonus of making a stranger happy. Now here’s something we can totally get behind!

If you want to get your very own caricature selfie sketch, get in touch with Sai here.