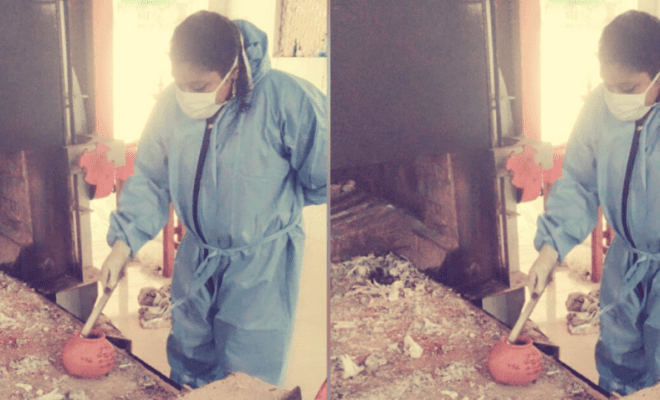 India, as of present day, is still recording hundreds of thousands of deaths every day due to the fast spreading Coronavirus, that has hit much harder with its second wave. Especially in places like Maharashtra, Delhi and Kerala, where getting hold of basic medicines, oxygen cylinders, ICU beds, or even a place to cremate the bodies of lost loved one has started to pose as a big problem. And in crematoriums, you rarely see women. So when you meet a woman cremator, you are impressed and surprised.

At a sensitive time like this, losing someone you cared for hits much harder, with not many people around to console you. It is perhaps, now more than ever, that the world needs compassion, a thought that crossed the minds of 29-year-old Subina Rahman who has been busy overseeing last rites at a crematorium in the Irinjalakuda town of Kerala for Hindu and Christian families. She is a Muslim, woman cremator. Yes, the odds are stacked against her.

The manager of the crematorium, Subina shared, ““I have been overseeing this crematorium over the last two years. Since the outbreak of Covid, my work has shifted almost entirely to cremating the dead.”

Also Read : New Study Done By The Health Ministry Says 70% Of COVID Deaths Are Amongst Men. So Are Women At A Lower Risk Of COVID?

“The pyre does not discriminate on the basis of religion. If anything, it has made me realise why more women must be involved in after-death rituals," says 29-year-old Subina Rahman who spent Eid overseeing funeral rites at a crematorium in Kerala.https://t.co/2dBBj6uFjF

While on one hand the priests and even some families have turned their deceased away, Subina stands with an open heart, finishing the last rites and even consoling the ones who feel broken at the sight of such immense and tragic loss in their lives.

She says, “For ages, women have been kept away from ministering to the deceased. My job is allowing me to serve Hindu and Christian families.” And not to forget, she is one of the very few in the field, which is otherwise largely male-dominated. Subina says, “The pyre does not discriminate on the basis of religion. If anything, it has made me realise why more women must be involved in after-death rituals.”

And even though Subina shares how she had taken up the job with a slight reluctance, for she wasn’t sure if she would be accepted by Hindus in such a sacred place, today she stands true to her duty, consoling people at a time they need it the most.

K.R. Vijaya, an advocate for women rights in Irinjalakuda spoke on the matter and said, “It’s amazing to see a woman show such courage amid a raging pandemic. In death, the grieving need empathy more than a robotic dispensing of duties, and women are better suited for that.” He went on to point out how, “The pandemic has shown that social hierarchies break down during catastrophes of this scale and intensity.”