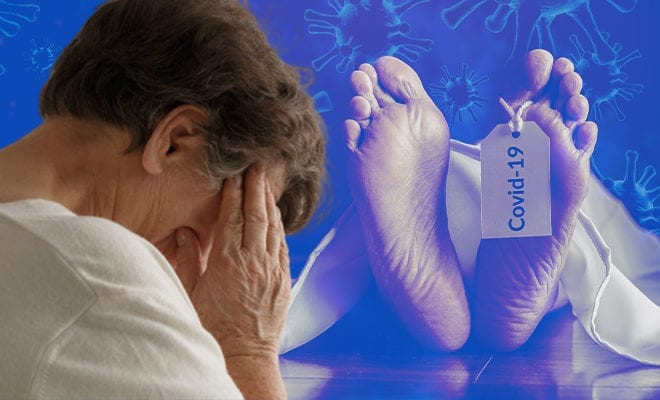 There used to be a time when calling someone human was a compliment, as opposed to a kind of an abuse that it seems now a days. With crime rate rising with every second, especially against women and even during this time of a pandemic, humanity has simply lost its meaning, as people whom we expect to fall back upon for help during testing times, are the ones taking advantage of it. A hospital staff in Bihar for instance, that has recently been accused for sexual harassment by a woman even while the woman grappled with the death of her husband who died of negligence.

An incident that has come to light after a 12 minute long and heart-shattering video was released on the internet, wherein a woman could be seen expressing her grief, disbelief and mourning the loss of her husband. In the video, the woman alleges doctors and staff at three hospitals for refusing to attend to her husband, changing his dirty clothes or even change his soiled sheets.

She also mentions in the video how the staff at Bhagalpur’s Glocal Hospital where she had first taken her husband to, wasted half a vial of Remdesivir, the medicine which isn’t just too hard to procure right now in the country, but also being sold at rather expensive rates.

'No Water For Husband… My Dupatta Yanked': Woman's Hospital Ordeal

She can be heard saying, “My husband and I stay in Noida. We came to Bihar for Holi… it was a family get-together. On April 9, he fell ill… had high fever. We tested for coronavirus twice, but it was negative. While we were waiting for RT-PCR test results, a Noida doctor told us to get a chest CT.”

She continued, “We admitted them – my mother was also unwell – to the ICU… but there was so much negligence. Doctors used to come and go in minutes… attendants were missing and refused to give the medicines. My mother was in better condition but after a point my husband couldn’t speak. He’d signal for water, but nobody gave him any.” Just listening about the nonchalance towards a patient fighting for life and death, made us uncomfortable.

She then went on to share, “There was one man – Jyoti Kumar. He was an attendant at Glocal Hospital. I requested him to help… to give my husband clean bedsheets. He said he would help but when I was talking to my husband, my dupatta was yanked from behind. I turned around… he was smiling with his hand on my waist. I snatched the dupatta back… but couldn’t say anything because I was afraid. ‘My husband is here, my mother is here,’ I thought, ‘If I say anything, they will do something to them’.”

Soon after the allegations, local government officials made a visit to the hospitals to inquire into the matter and suspended the accused employee as per their investigation. However, that wasn’t all. The woman in the video, visibly distraught and disturbed also went on to mention the horrific experiences she had in Mayaganj and Patna where she took her husband next.

Accusing doctors in Mayaganj for not tending to her husband during night shift and refusing to give her husband oxygen despite making several appeals, the situation as narrated by the woman was enough to give us a hard-hitting reality check.

Moving on to the hospital in Patna, she alleged that staff of the hospital let her husband’s oxygen levels drop to an alarmingly low rate and once they were stabilized, they were cut off completely. She was then forced to get her own oxygen cylinder from the black market, at a higher rate no less, if she needed to see her husband survive.

The case was enough to let us in on the gravity of the situation out there, where people are dying of both – the virus and the inhumanity of the very people who claim to save lives.

Also Read : In Kolkata, A 75-Year-Old Grandmother Hugged The Doctor Who Helped Her Recover From COVID

GET HAUTERFLY IN YOUR INBOX!
Related ItemsFeaturedTrendingwoman says her husband was given no waterwoman alleges three hospitals in Bihar for mistreating her covid positive husbandwoman alleges her duppatta was yanked"no water for husband" says woman on video message