Mann Kaur Is A 103-Year-Old Athlete Who Received The Nari Shakti Puraskar. Watch Out For Her Cute Dance After Winning The Award 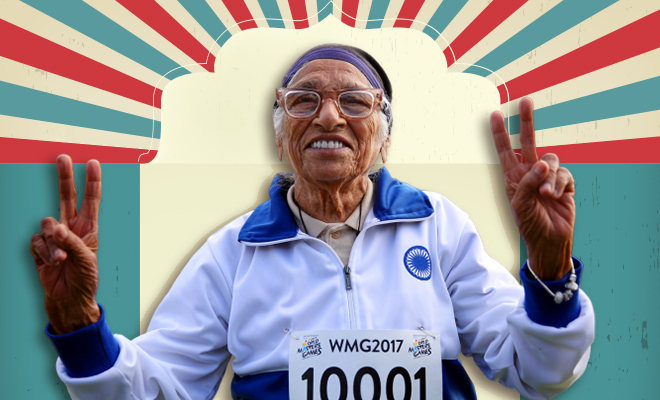 You know they say that after a certain age, women are only supposed to sit at home, watch sappy dramas on TV, take care of children, pray and cook for the family . That is what people expect a woman who is 60 or 70 years old to do. When you see an old woman doing anything other than these things, it is a little surprising. How dare you now draw yourself into corners? Why are you enjoying life in this old age? It makes everyone uncomfortable.

Let me give you an example of a woman who has broken more barriers in her nineties than most of do while we are young. I am talking about Mann Kaur or more popularly known as “Miracle from Chandigarh”. Believe it or not, Mann Kaur started her athletic career at the age of 93. Yep, when women are expected to fall into religious duties and just care for their grandchildren, she was running away (literally) from all those barriers and stereotypes and that’s what makes her the inspiration she is.

The whole reason I am talking about her today is that she was recently honoured the Nari Shakti Puraskar by President Ram Nath Kovind. This 103-year-old woman has won more than 20 medals at the World Masters Games and America Masters Game. She ran the 100 m World Masters Games in New Zealand in 2017 at a National Level. And she even won a gold medal at the Worlds Master Championship in the USA in 2013.

Also Read: Bhageerathi Amma, The 105-Year-Old Woman Who Gave Her Grade Four Examination Last Year, Will Be Honoured With The Nari Shakti Puraskar. We Are So Inspired.

The world is consumed by fear of COVID-19, but here’s one ninety plus lady, Mrs. Kaur, who won’t be scared at all, in my opinion! She looks like she’s ready to outrace the virus. What an inspiration. pic.twitter.com/t6nKrayCTZ

Mann Kaur is also associated with the Fit India Movement which was launched by PM Modi last year as a way to encourage people to remain healthy and fit through more physical exercise. Despite her osteoporosis, she has broken multiple world records and won more medals with her determination to succeed.

Even business tycoon Anand Mahindra tweeted about her saying, “The world is consumed by fear of COVID-19, but here’s one ninety plus lady, Mrs. Kaur, who won’t be scared at all, in my opinion! She looks like she’s ready to outrace the virus. What an inspiration.” He later clarified saying that Mann Kaur is in fact, over a hundred and that makes her “even more inspirational”.

Along with his tweet, he posted a video of Mann Kaur collecting her Nari Shakti Puraskar. The video is so adorable, especially the part in the end when she does her little dance; it just melts your heart.

She is a true inspiration!