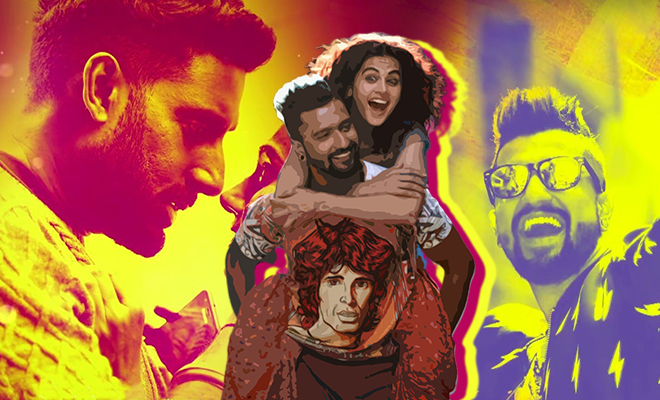 Manmarziyaan Completed A Year Today. Everyone Should Watch It To Believe In Love, In Destiny And In Arranged Marriages

We’ve all been in relationships that left us feeling scarred. You know that feeling when you give it all, love like you’ve never been hurt and still somehow it doesn’t work out. Sometimes, it’s the guy who was wrong and sometimes it’s just that the time wasn’t on your side. Either way, lost love can hurt you and often we think that love, like that, will never come to us again. Because some people have fed it in our heads, that love happens just once (I am looking at you Rahul from Kuch Kuch Hota Hai.) So what happens to those people who have loved and lost? I mean, if that statement was true, everyone would be very single. But thankfully, it’s not. At least, I like to stay optimistic about love. And this is mainly why, I love the movie Manmarziyaan so much. People who know me, know that how much I love and adore this very underrated movie. It made just 40 crores at the box office, while a movie about a misogynistic guy, Kabir Singh, basically printed money at an alarming rate.

The romantic love-triangle follows the journey of three characters: Vicky Kaushal as Vicky, Taapsee Pannu as Rumi and Abhishek Bachchan as Robbie. Rumi and Vicky are madly, passionately in love and the entire mohalla is aware of their amorous affair. It’s going beautifully for them, until Rumi asks him to marry her but he is not ready to take on the responsibility of that…or anything else in life. Of course, that leaves Rumi heartbroken and she decides to marry Robbie, who is well-settled and responsible, and aware of their relationship. This is a story of heartbreak, but it is also the story of hope. This is a modern-day fairytale, which makes you believe that love can happen again, and arranged marriages aren’t that bad after all! Considering the fact that most Indians end up arranging their marriage, Manmarziyaan comes with the promise of easing you into it, and erasing all the apprehensions that gives us cold feet.

What I also love about this is that unlike other movies that show characters that never fail to be sanskaari, Manmarziyaan shows the not so flattering side of each of them. Rumi gives in to temptation because she hasn’t moved on, Vicky fails to take a stand for his love and Robbie manipulated the woman he liked, to get out of her relationship and marry him instead. All of them are at fault, but their mistakes don’t define who they are, or their intentions. It shows that real people can do things out of character, because nobody is perfect. What matters is you realise you were wrong and can make up for it.

Manmarziyaan doesn’t have a lead heroine, who is conventional, doesn’t indulge in alcohol, saves herself for marriage and doesn’t answer back. Rumi is bold, confident and can take a stand for herself, even when she is really breaking from inside. She is comfortable in her skin and doesn’t have a skewed sense of sanskaar. And Robbie, he accepts her and loves her for who she is.

This dialogue here gives me all the feels:

And even after all that chaos and mess their romances create, I like the fact that they found it in them to forgive and not spike their hearts with grudges. Manmarziyaan reinstates my faith that marriages are made in heaven. Because if you’re not meant to be together no matter how you try, it will not work out. And if you are destined to be together, it will just happen, against all odds. It makes me believe in second chances and happy endings. Love will find you again.

I hope all of us have the courage to walk away from a guy who cannot give us what we really need. I hope all of us find our Robbie, who will be crazy about us, the way we are, with all our flaws and imperfections.

ALSO READ: 10 Things You Can Do For Him That Say ‘I Love You’ Without Saying It

Apart from all the hope and happiness this story of love and loss brings us, I am also very thankful for the amazing songs! Needless to say, all the actors have performed extremely well and portrayed the depth of emotions with ease. I feel every woman should watch it once, especially if you’re at a crossroad in life. And also, because umm, Vicky Kaushal.

Every Headline About Mission Mangal Crossing 200 Crores Calls It Akshay Kumar’s Film. So No One Is Going To Credit The Women?