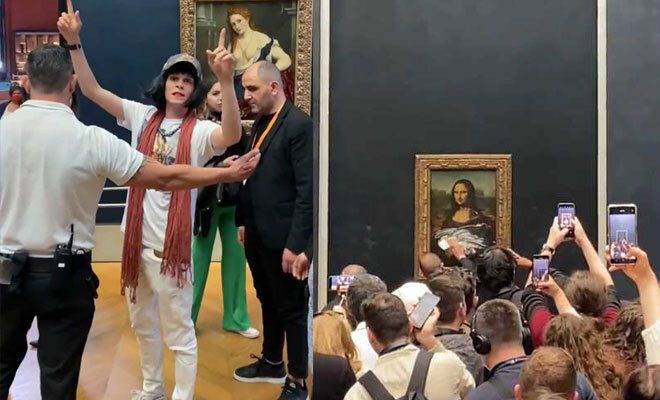 Man Disguised As An Old Woman Smeared Cake On The Mona Lisa At The Louvre. His Reason? The Environment!

I love people. I love how randomly out of the blue they do absurd things that are hilarious and also a bit damaging. I mean take the most recent example of this man in Paris who dressed up as an old woman, went to the Louvre Museum, and then smeared Leondardo da Vinci’s Mona Lisa with cake cream. I wish I was making this up, but no I’m not. In fact, videos from this incident have gone viral on social media.

On May 29, a video from the Louvre Museum in Paris went viral when a man dressed as an old woman stained the Mona Lisa painting with cake. Luckily, the cake collided with the glass that protects the painting by Leonardo da Vinci and causes no harm to it.

Maybe this is just nuts to me💀but an man dressed as an old lady jumps out of a wheel chair and attempted to smash the bullet proof glass of the Mona Lisa. Then proceeds to smear cake on the glass, and throws roses everywhere all before being tackled by security. 😂??? pic.twitter.com/OFXdx9eWcM

As per reports, a witness who was in the Louvre Museum at the time said that the man had worn a wig to disguise himself as an old lady and was in a wheelchair before he suddenly stood up and approached the Mona Lisa, throwing the cake directly at her.

Needless to say, the museum security rushed to eject the man from the room and take him away from Leonardo da Vinci’s Mona Lisa. And while this incident took place, many guests at the museum continued to take pictures and videos of the situation as well as La Gioconda.

What was surprising was that despite the incident taking place in the museum’s most inaccessible room at the time because the Mona Lisa and other artworks are always packed with tourists, it did not further escalate. The video shows Louvre Museum’s security removing the man from the building and cleaning the glass.

Can anybody translate what ole dude was saying as they where escorting him out?😂 pic.twitter.com/Uy2taZ4ZMm

For those unversed, this is not the first time the painting was attacked. Attempts to steal, deface, and use it to raise awareness for various causes have been made throughout history.