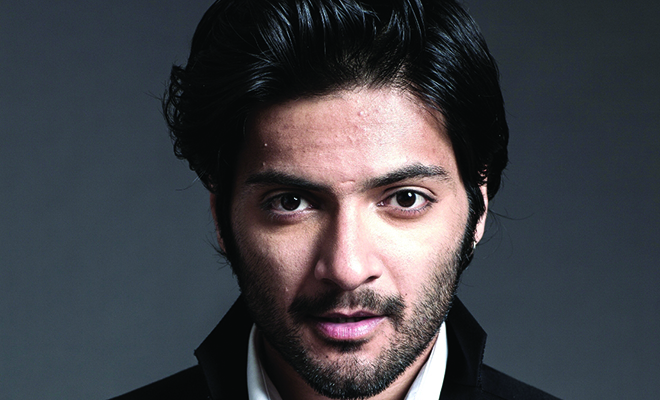 While we, the #HauteSquad, love all things girlie and are champions for strong, inspiring women, we also love our boys. And to show them some of this love, we introduce our new series #MCM — Man Crush of the Month. Every month, we’ll feature a man who’s doing something cool and making us proud — and looking good while doing it. Stay tuned for some serious *heart-eyed emojis*.

This month, we are crushing over chocolate boy Ali Fazal. It all started with his debut movie, 3 Idiots, after which we haven’t been able to stop gushing at his boy-next-door vibe.

His big Hollywood project, Victoria And Abdul, is releasing soon and we’re eagerly looking forward to seeing Ali in a different avatar. From working out on the streets to training to fly (for a bit), he’s managed to cover a fair bit of ground (and air) in his short career span.

Read on as he talks to Hauterfly about his next movie, his most romantic date (it’s awesome), and what he regrets most in life, and get ready to fall head over heels with him, all over again.

What were you doing before you started acting? Take us through your career so far.

Shit, that’s a long time. So I did my schooling in Dehradun and then came to Bombay for college, and that’s how St Xavier’s happened. I was in my second year when I got the role in 3 Idiots and even after that, I continued studying and interning.

Even though I was a bit of a geek, I starting doing plays and stuff on the side. Then I did a film produced by Shah Rukh Khan, Always Kabhi Kabhi, in which I had the lead role. It tanked at the box office, but it was my big break. After which Fukrey and the other movies followed.

It’s been a short career but yeah, this is what it is.

Tell us more about your next movie, Victoria And Abdul. How did you bag the role?

I got a tip off in one of the meetings that this film was happening and I was told that I should go audition for it. So I went and then forgot about it. After a month or so, I got a callback and then a few more meetings happened — oh, it was a long, long process.

And how was it working with Judi Dench?

She is a fantastic actor and her sheer presence made my job that much easier. It was an ambitious project since it’s a biopic, so we had a vast team. At one point, I had to gain 10 kilos and then shed it all, so it was difficult.

Then again, Stephen Frears is an amazing director, so it was a fun set. And we shot for 60 days straight, back to back.

What are your future projects?

I just wrapped up Fukrey Returns, only one more song needs to be shot. There are 2 more projects in the pipeline, but since I haven’t signed the contracts yet, I can’t give out the deets.

I’m also working on the script of my short film.

Top 3 challenges that you have faced in your journey till date?

If given a chance to do something differently in life, what would it be?

Oh, I would spend time in an acting school and study more. I never got the chance. And also, I would not have done a couple of the films I did, but did them at the time because I thought I was moving forward.

Everyone has regrets and those who say they don’t are liars.

So, can you name the movies?

Are you mad? I’m not giving you any names!

I just did it! I always wanted to do a biopic and it’s happened. But doing one takes a toll on you. You have to be in character for days. It was intense. Earlier, I used to make fun of those who used to go through this but when I finally did, I couldn’t share it with anyone.

So yeah, I just did my dream role, but you always cook up a new dream — that’s just how it goes on.

Another clichéd question, where do you see yourself in the next 5 years?

I was trained to fly, but if you give me the controls now, I would probably crash it. I think I’ll stick to PS4 for now.

What’s your idea of the perfect woman?

I think someone who can fight for her rights and can be nurturing as well. The idea of motherhood is underrated. If you ask me for superficial things, I can give you a list, but I’d rather not.

But it would definitely be someone who is witty, humourous, with whom you can have a good conversation with.

What is the most romantic thing that you have done for someone?

If you had asked me this questions last year, I would have said this: I broke into my friend’s house, played some music, and laid out a 5-course meal prepared by a chef. It was clichéd but beautiful, and it worked.

But, as of last month, this happened: even though I wasn’t serious with this person, we flew over the Golden Gate Bridge in San Fransisco and skydived together. And behind us, there was this flyer, the kind of banner you see in the movies with a message written on it.

I wish there was something better written on it, but it was an inside joke so it was still a beautiful and damn romantic experience.

Any advice for upcoming actors?

Don’t spend too much time learning how to act; you’d rather utilise your time to read about anything and everything. It will help you grow and thereby, become a better artist.