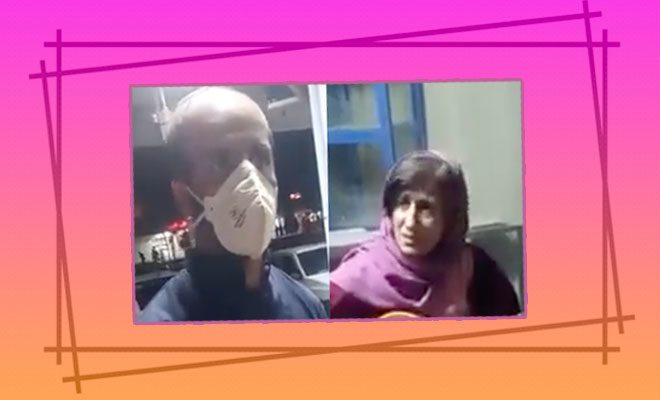 Man Asks Woman To Stop Singing In Public In The Name Of Religion, Gets Rightly Shut Down

Religion is a man-made concept. There I said it. Religion is an institution that was created by men to serve men. Since the time of its creation till now, religion has been twisted, broken down, and manipulated in every way possible to favour men. But just like there is a limit to everything, there is a limit to how much a man can do in the name of religion. Believing and having faith in your religion is one thing, but using it to oppress someone else, especially another gender, is downright unjustified and wrong. But there are men who do so and some do it publicly as well because they believe that in the patriarchal society they are the superiors and won’t be questioned. Well, not always. Take the instance of this video that went viral on Twitter that showed a man asking a woman to stop singing in public, but what happens next in the video is so heartwarming.

Recently, Iranian journalist and activist Masih Alinejad took to her Twitter to share a five-minute long video that went viral and created quite a buzz. In the video a man is seen asking a woman to not sing because it is not acceptable in their religion and the onlookers instead of keeping quiet call him out.

The Twitter video starts with the woman playing her guitar and singing when a man with his mask on approaches her. On his arrival, he asks the woman to stop singing in the name of  religion and before she has the chance to respond, another woman standing there questions him about the reason for his demand.

Also Read: Iranian Artists Are Being Thrown In Jail For Going Against Government Regulations Against Women Singing And Dancing. What Kind Of Nonsensical Oppression Is This?

And soon enough the conversation then moves from the woman singing and turns into a discussion about religion and what’s allowed in Sharia and Islam. The crowd standing around also join in the discussion and counter-reason the man’s baseless reasoning. In the video, a woman is seen stating that the rules were made by men to serve men.

The discussion then moves on to the corruption in the country and how the man who approached the singing woman should think about that instead of demanding her to stop. Soon after, a man from the crowd approaches the man who demanded the woman to not sing in public and asks him to leave. It took one more round of heated conversation between the man and the crowd for the man to leave. No sooner did the man leave that the woman was asked to sing and as soon as she started singing the crowd cheered her on.

Watching the response from the crowd and their support to the woman singing was honestly so heartwarming. The fact that people were not ready to accept baseless arguments just because it involved religion is not something you get to see everyday! Baseless and unjustified ideologies have been created in the name of religion. But now, people are open to questioning them and aren’t ready to accept religion as the basis of just about any argument. And that is a win for team logic!

Daniel Craig Says “Why Should A Woman Play James Bond?” Just Create Better Roles For Women. He Is Absolutely Correct