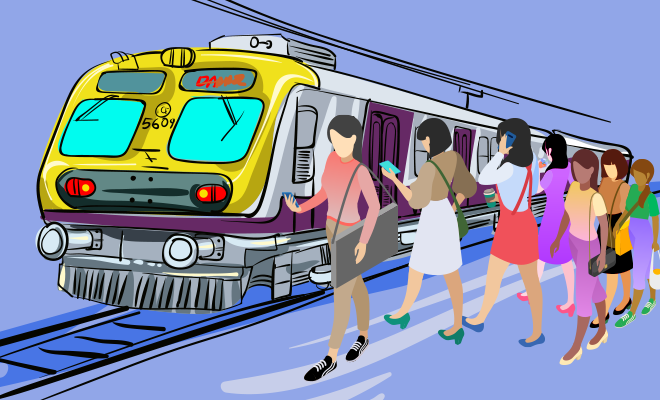 About six months ago, when the entire nation had been put under a strict and seemingly indefinite lockdown thanks to the virus that started claiming thousands of lives by the day, everything around the country was put to a halt. Businesses, schools, daily chores, everything ceased as the world experienced a global stand still. Movement was a lost concept, as both public and private transportation was discouraged. But now, as things start to get a tad bit better if not entirely so, we can see a semblance of normalcy making its way back. And one of the recent ways in which it has returned is by Mumbai government announcing the re-start of local trains, but only for women.

Coming down as a huge sigh of relief for the female population of Mumbai city, as the government has finally decided to resume the local train services for the women, we can now expect the commute to be a lot easier and much more safer than women wandering around the relatively empty streets all by themselves.

Starting on Saturday, October 17, women will now be allowed to access train services between 11 am to 3 pm and from 7 pm till the last service. Ladies will be given a special permit to travel with in the allotted hours and the local train service shall be available to all essential service providers for the rest of the day. The state government also said in statement, “During the said period, entry may be allowed to all ladies having valid tickets and to all emergency staff as well. QR codes will not be required for ladies travelling during the said time period.”

Also Read : Vidya Balan And Taapsee Pannu Go Back To Work But Follow All Safety Norms. Are We Limping Back To Normalcy?

After having stayed shut since March 23, the local train services were resumed in June but only for essential workers, that too carrying a special pass. With this announcement however, now the women shall too be allowed to travel across the city for work or any other purpose, without having to bear the brunt on spending extra money on private transport, or feeling threatened for their security.

It is also being said that the Mumbai metro rail shall too be opening up soon, presumably from October 19, but in a graded manner. Mumbai Guardian Minister Aditya Thackeray had even shared that since there has been an pressure from the general public on opening up train services for all, that the normalisation of services might be announced by mid-October. As more time is passing and the curve of corona outbreak is slowly flattening, life is getting back to normal, with a hope for things to restored to as they used to be.

And while it is heartening to hear that general operations would be back in order, it is now that we have to take more precaution than ever, because with a virus like Corona on the loose, you can’t be too careful. But for now, seeing that the government put the interest of women ahead was a much needed relief.

Also Read : #LastNormalPhoto Is A Hashtag Where People Are Putting Up Their Picture From Just Before The Lockdown And It’s Making Us All Nostalgic