Kangana Ranaut Responds To Her Boycott And It May Not Be The Response They Were Hoping For! 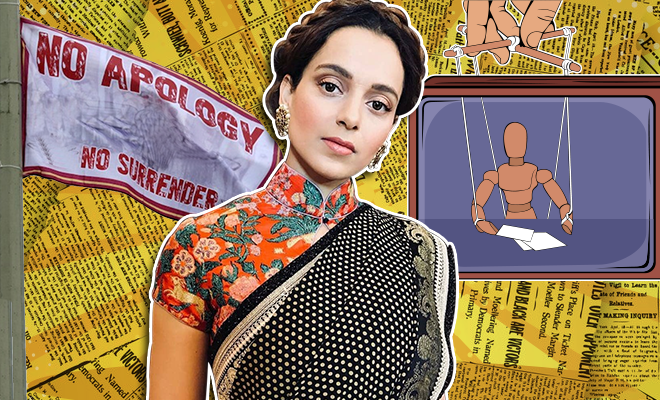 Bollywood, like any other industry, is in the business of constant production, you know, with it being one of the biggest industries and all that. Churning out content and films for mass consumption of the audience, sometimes with a script and storyline, sometimes without any respect for an audience’s time. Which is why, every time a Kangana Ranaut movie is in the offing, the people hope to watch a film that will deliver some promising acting and a brilliant storyline. What with the successes of movies like Queen and Manikarnika, the actress has carved a niche for herself in the industry.

But then, with Kangana, you have to be ready not just for some stellar acting but some drama, one that the other actors and the producers of the movie may not have always accounted for. Kangana has it in her nature to not hold back her action or mince her words when she strongly believes in something, and to be honest, at one point or the other, we all felt inspired and empowered by her courage and the way she has worked her way to the top. Except, the top may have gotten lonely for her.

ALSO READ: We Love Kangana Ranaut And How She Takes A Stand, But It Isn’t Fair If Hrithik Roshan Isn’t Allowed To Do The Same

Quite recently, the actress was attending a conference for her upcoming movie JudgeMental Hai Kya, and got into a spat with a PTI journalist, after she accused of running smear campaigns against her movie Manikarnika. We offered her the benefit of doubt, since even the videos that went viral only showed a part of the story and we felt there was more to it. And considering Kangana somehow always has a reason to do what she is doing, however trivial, we couldn’t help but wonder if she was actually right.

But the actress cleared a few doubts and issued a video response to the Entertainment Journalists Guild of India requesting that they should go ahead and boycott her.  In an IGTV video, the actress went ahead and pointed out all the times that particular journalist, Justin Rao, had gone ahead and made a mockery out of the woman’s efforts to stop the use of plastic, animal cruelty or talk about a movie on the life of a martyr. She addressed such journalism and journalists with names like ‘bikau’ and ‘desh drohi’,  the very words that her sister Rangoli Chandel also used in her not-so-flattering tweet about the situation just yesterday. While Ekta Kapoor may have issued a formal statement to journalists, Kangana refused to anything of the sort, instead ending the video with “Mere paas kisi bhi tarah ke desh drohi ke liye zero tolerance hai.”

She further talked about how she does acknowledge that journalists and writers have had a vital role in getting her where she is, but that she will never entertain such pseudo journalists who can’t show respect to a movie about a nation’s hero. And at this point, we are as conflicted as ever. One on hand, the actress, by literally quoting words out of her sister’s tweets and supporting her the drama she’s rustling up , and on the other hand we can’t help but feel her emotions having built up over a time after not getting that support from the media or the film industry as she expected. But then again, such overreactions are least expected from a thick-skinned actress like Kangana Ranaut. For someone who has been an insider for long enough to realise how it works, she too, seems to have settled herself comfortably in a bubble where she wants everyone to nod their heads at whatever she says like they must have wanted her to do in the early years of her struggle. Talk about life coming full circle.

And, we understand that the industry has always been in a way, biased and not an easy place to survive let alone be at the top of, but isn’t that everywhere? It just feels that after all this time, even if the actress makes a strong case for herself with this video and the revelations in it, it would be cast aside as yet another episode of the boy who cried wolf. We hoped, even in our previous article, for her to take the high road, but guess the actress has chosen to get in the middle of another mud-slinging match, one that isn’t ending anytime soon.