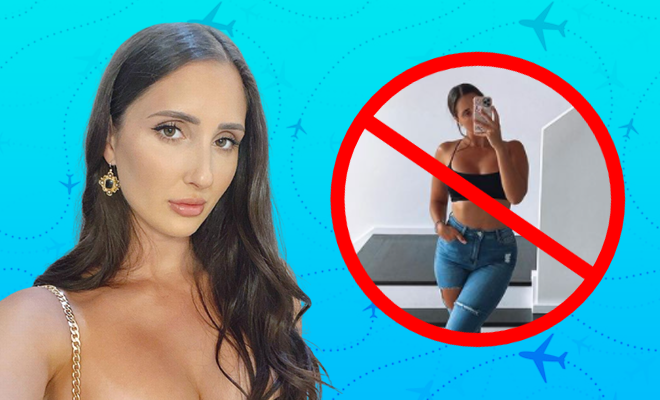 Jetstar Polices What A Woman Should Wear On A Flight. She Asks, ‘Is This 1921?’

We’re not saying that it happens to only women. But it really does happen only to women. We’ve never read the news of a shirtless man being offensive to fellow passengers and being asked to cover up. Flying with Jetstar recently, an Australian model had a less than savoury experience and the airline is facing some backlash for being too harsh. The crew and brand have recently come under fire for humiliating model Isabelle Eleanore on a flight, while asking her to “cover up”.

A case that has been repeated several times with several different airlines, and yet there has been zero takeaway when it comes to learning about how to respect women and their choice of clothing on a flight. Seems like Jetstar has chosen to learn by its own example after it asked a woman on board to “cover up”, suggesting that her attire was inappropriate for flying. Because apparently wearing a black crop top with jeans is just not allowed on Jetstar.

Isabelle Eleanore, an Australian Instagram model, took to her social media to report the entire matter online, not letting such unnecessary humiliation and wardrobe policing slide. She shared how she had not been stopped and asked to cover up by any other airport staff until she tried to board the flight to Melbourne.

Also Read : A Woman Asked To Cover Up On A Flight Or She Gets De-boarded. Wtf Is Happening?

She went on to reiterate the words of the flight attendant who told her that, “’You can’t fly with what you’re wearing, you can’t wear a bikini.’ Posting on Instagram and Twitter, Eleanore also wrote, “So they made a huge scene when I stepped on the plane and made me wait in front of everyone while they searched for something to cover me up with. Then I had to walk all the way to my seat wearing this vest . This is discrimination and humiliation Jet Star Australia. Apparently my top is too small and I couldn’t fly without covering up. If I had small breasts I guarantee they wouldn’t have said anything.”

She then went on to say, “They have forced me to put on a hi-vis vest. I am lost…. is it 1921 not 2021?”, and we would be lying if we said we weren’t wondering the same thing. For some odd  reason, women and their choice of clothing have offended society, but the thing is, we don’t owe any explanation for why we choose to dress the way we do.

Instagram and OnlyFans model Isabelle Eleanore said she was “shamed and humiliated” after a flight attendant told her to cover up.https://t.co/Ll9kZ6LIBL

Instagram and OnlyFans model Isabelle Eleanore was left feeling "victimised and degraded" after being told to "cover up" onboard a flight from the Gold Coast to Melbourne last night. #9Newshttps://t.co/4wBPaORegl

Shame on Jetstar for pushing orthodox and sexist ideals onto women in the 21st century. Isabelle Eleanore also shared in a follow up post taking a dig at the society as she wrote, “’The reason this is striking a chord with so many people isn’t a reflection on me, but a reflection on society, and the belief that society should be able to dictate what is acceptable for people (more so women) to wear and do. To be publicly shamed and humiliated over a clothing item and/or the exposure of skin is archaic and discriminatory behaviour.”

Although Jetstar claims to have reached out to the passenger and apologised for their discriminatory behavior, they issued a statement saying, “We’ve contacted Isabelle about her recent experience and have apologised for the way the situation was handled. There was a misunderstanding of what our policy was, and we have reminded our crew of our dress requirements. While we do have basic dress requirements on our flights (ie. shoes), we do not have any policy regarding crop tops.”

Hey Jetstar, how about next time you make sure that your staff reading the same manuals!

Also Read : We Asked Indian Airlines What ‘Appropriate’ Clothing For Women Onboard Is. Cover Up! Apparently