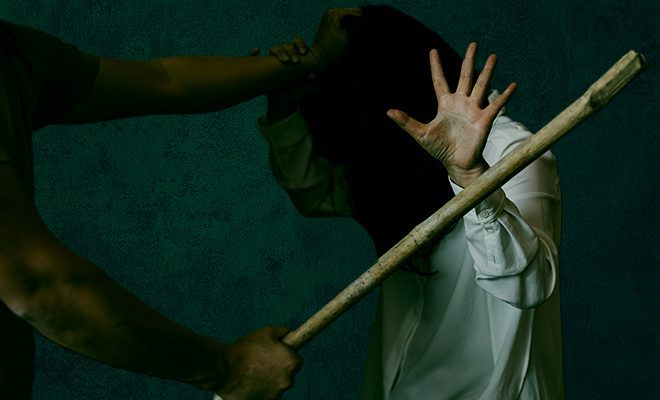 In UP, A Girl Assaulted With Sticks By Family For Wearing Jeans, Dies

Being a woman in society and not being told what to wear when is nearly impossible. As a woman, at least once in your life, you’ve been told off because of the clothes you wear or the lack of them. Somehow the family we’re brought up in and the people we are surrounded by feel that it is okay to comment on what a woman wears. And let me tell you it isn’t. A woman should be given the freedom to choose what she wants to wear and where she wants to wear it. But that doesn’t always roll along with family elders. The instance of this young girl who was beaten to death with sticks by her family for wearing jeans – is proof enough of the double standards of society.

Recently, in Uttar Pradesh’s Deoria district, a 17-year-old girl was found hanging off a bridge for hours on end between Monday evening and Tuesday night. The body was hung off the bridge after she was murdered by her grandfather and two uncles for her lifestyle choices and the types of clothes she’d wear.

Ghastly images and videos were shot by the people around the bridge on Tuesday. The videos showed the girl’s body hanging from the railing on the bridge and a policeman and a local trying to pull up her body. While another video showed the police officers inspecting the area nearby. An aunt in her statement revealed that the family had a problem with the types of clothes she wore.

According to the police investigation, the girl and her mother had come to live at their in-laws’ place in Deoria. Speaking to the girl’s mother regarding the case, she revealed that “She was on a fast and wore jeans and a top after her evening bath. And was going for puja when she was told off by the father for her jeans, but she resisted. They then attacked her with sticks, said they were taking her away to get medical aid but threw her off the bridge.” She confirmed that the family did have a problem with the kind of clothes she wore.

One of the aunts of the girl seconded the mother’s statement. The aunt said that the family had always been jealous of the girl’s family, what clothes they wore, what food they ate, etc. She told about how things got out of hand when they assaulted the girl. She remembered them telling the girl’s mother that they were going to take the girl to the hospital but instead they threw her off the bridge.

Mr. Sripati Mishra, Deoria’s police chief, in a video statement stated, “The girl had an argument with her grandfather and abused him. 2-3 uncles of the girl then assaulted her, and she fell unconscious. The relatives were then taking her to the hospital, but she died on the way. They tried to dump the body, but it got stuck on the river bridge.” He also has not confirmed if the attack was due to the clothes the girl was wearing.

The reports state that the girl’s grandfather who was involved in the assault was arrested. But the two uncles who also assaulted her for wearing jeans are still on the run. The police are still investigating the 17-year-old’s case.

It is sad to know that even in the 21st century, we are telling our women and girls what they can and cannot wear, even if it just jeans. Just like how it is a man’s choice as to what clothes he wants to wear; why is it not the same for women? We need to stop associating clothes with a woman’s character. Clothes are for comfort, self-expression, and moreover a choice. Let them be just that.