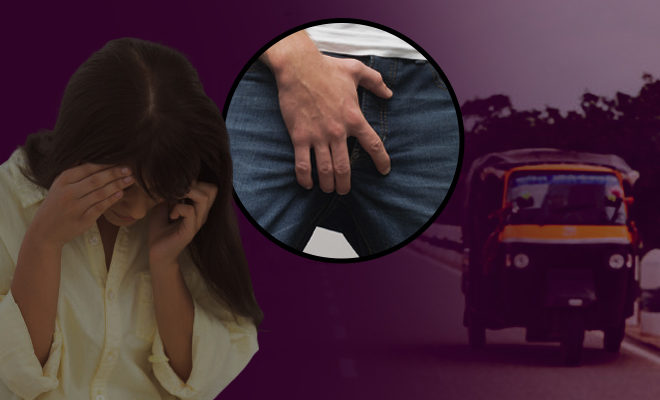 In Pune, This Man Masturbated At A Woman In An Autorickshaw

There was a time when I used to be terrified of travelling alone, especially by rickshaws. You see, I had a bad experience once in college. A rickshaw driver was touching himself while looking at me in the rearview mirror. As soon as I realised what he was doing and why he was only driving with one hand, I asked him to pull over and got into the first building I saw. That incident gives me nightmares even today. I agree that not all men are as creepy but the nice ones have no clue about these things. Can you blame them though? They go through life never having to worry about someone flashing or masturbating at them. Ah, what must that feel like? When you do what I do, you begin to realise just how often women are targeted by creeps who want to flash them. Recently, a woman in Pune was sexually harassed in this manner. A man masturbated at her while they were in a rickshaw together. It’s just so disgusting!

Also Read: A Man In Bengaluru Flashed And Masturbated In Front Of A Woman On The Road In Broad Daylight. This Is So Disgusting

The victim narrated the entire incident to the police deployed at the Yashwantao Chavan Memorial hospital premises. The police launched a probe and arrested the pervert responsible. Reports quoted a police officer saying, “After getting down from the autorickshaw, the woman immediately alerted the policemen at the police chowkey on the premises of the hospital. The suspect Soheb Qureshi was taken into custody with the help of locals.”

This is just absolutely disgusting.

Two Men In UP Caught On Camera Stealing A Woman’s Underwear, Occult Rituals Are Being Suspected