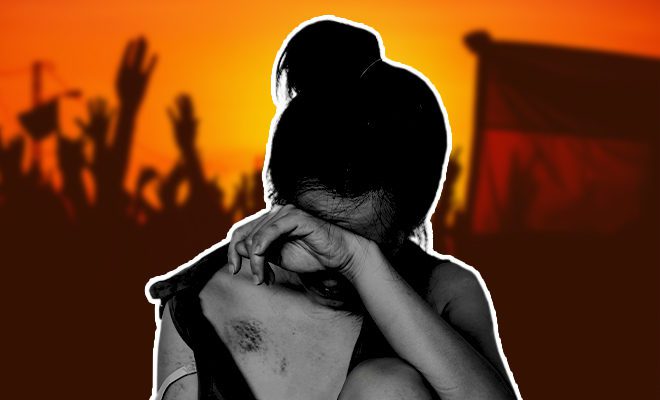 In Pakistan, A Woman TikToker Was Brutally Assaulted, Her Clothes Torn By A Large Group

For someone who has grappled with anxiety most of her adult life, crowds are one of my biggest fears. Walking into a crowded street, a temple or even a concert makes me feel claustrophobic and uneasy. Maybe it’s just me but I am constantly worried about someone misbehaving or touching me inappropriately. It has happened to me at Lalbaugcha Raja, out of all places. This morning, I was reminded of this fear when I read reports about a Pakistani TikToker being assaulted on the road by a large crowd of people on their Independence Day. It’s a terrifying ordeal.

On 14 August, Pakistani Independence Day, a woman TikToker and about 6 of her friends were filming a video near Minar-e-Pakistan. Suddenly, a large crowd of 300-400 people started attacking them. The woman claimed that her clothes were torn and they kept throwing her up in the air. Reportedly, she and her friends made numerous attempts to escape but to no avail.

Talking about this horrifying situation, this woman said, “The crowd was huge and people were scaling the enclosure and coming towards us. People were pushing and pulling me to the extent that they tore my clothes. Several people tried to help me but the crowd was too huge and they kept throwing me in the air.”

The Lahore police have filed an FIR against hundreds of unidentified people. According to the FIR, this woman’s rings and earrings were stolen along with her friend’s phone, his identity cards and Rs 15,000. Lahore DIG Operations Sajid Kiyani ordered the superintendent of police (SP) to take “immediate legal action” against all those involved in this incident. A video of this incident has gone viral and is enraging netizens.

Hopefully, the main perpetrators of this crime are caught. It’s disturbing that a woman can’t even walk down a street without getting assaulted.

This Pakistani Influencer Used A Sedated Lioness As A Prop At Her Birthday Bash. What Is Wrong With People?