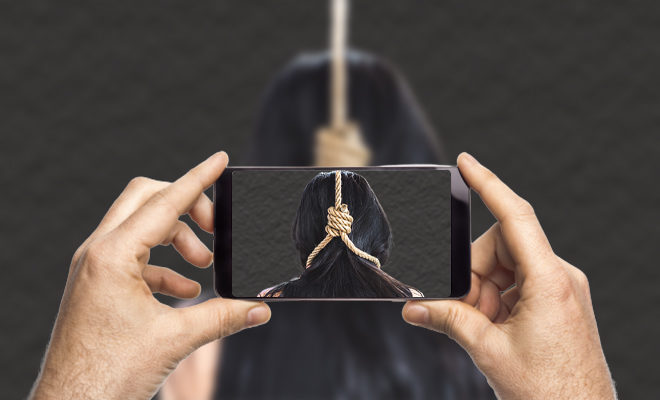 Woman’s In-Laws Record Her Hanging Herself As Proof Of Innocence. Turns Out, It Was A Dowry Death.

As much as I am proud to be Indian and live in what is regarded as the biggest democracy of the world, there are also enough reasons for me to feel ashamed. Not for my heritage as much as for the patriarchal traditions that come with it. One such being the century old tradition of demanding dowry from the bride. A social evil that takes more than 7 thousand lives in a year. And it has claimed one more, after the death of a woman in Uttar Pradesh, who is being assumed to have taken her own life after being pressured by her in-laws for dowry.

The woman who was only 25-year-old, hanged herself to death, while her in-law recorded a video through the window, to show as evidence that they had nothing to do with it, and in order to ‘absolve’ themselves of the murder. It has been alleged by the parents of the deceased that they were hounding the woman for dowry, the pressure of which led to such events.

As of yet, the father and mother-in-law of the victim have been arrested while her husband is said to be on the run. The woman has been identified as Komal, living in the  Muzaffarnagar’s Datiyana village with her husband, Ashish, and in-laws.

Also Read : Daughters Aren’t A Burden, Dowry Is! This Fashion Campaign By A Pakistani Designer Paints The True Picture Of The Evil Social Practice

What is utterly shocking and disheartening is that on Sunday, as Komal prepared to hang herself from the fan in her room, her in-laws stood outside the window and simply watched. The video recorded by her in-laws as proof to absolve them shows Komal tying a knot around the beam lining of the ceiling and then tying a blue stole around her neck.

In the video, she is then seen tightening the scarf around her neck so that it doesn’t slip open. As she readies herself to hang to death, a male voice from the background echoes to say “Apne aap latak rahi hai (she hanged herself on her own).” The man is alleged to be the father-in-law who was simply standing and witnessing rather than stopping her from taking her life.

#UttarPradesh: In a shocking incident, a family lined up outside a window to shoot a video even as their daughter-in-law hanged herself to death inside. (IANS)
(Representational Image) pic.twitter.com/Rz2bvcEvWN

The next day on Monday, the in-laws of the woman shared the video on social media with the hope that it would go viral, which it indeed did. SP (city) Arpit Vijayvargiya who confirmed that the video was taken from outside the room also said, “They had tried to stop her from killing herself.” However, the parents of the girl had a different, more shocking stance on the incident.

“I had given Rs 5 lakh and a bike to his family at the time. But his father Devendra, mother Savita and brother Sachin were not happy. About six months ago, they beat up Komal and drove her out of the house. The elders of the village sent her back,” the father of the deceased, Anil Kumar, narrated in his police complaint.

He then went on to allege, “Two months ago, they started demanding Rs 1.2 lakh. They said that they would get Ashish married to someone else if she could not pay the dowry. All four of them got together and killed my daughter.” All four have now been booked under sections 304B (dowry death), 498A (cruelty to married woman) and 506 (criminal intimidation) of the IPC and under sections 3 (giving or taking dowry) and 4 (demanding dowry) of The Dowry Prohibition Act.

Also Read : In Odisha, A Woman Was Stripped Naked And Beaten Up By Her In-Laws Over Dowry Issues