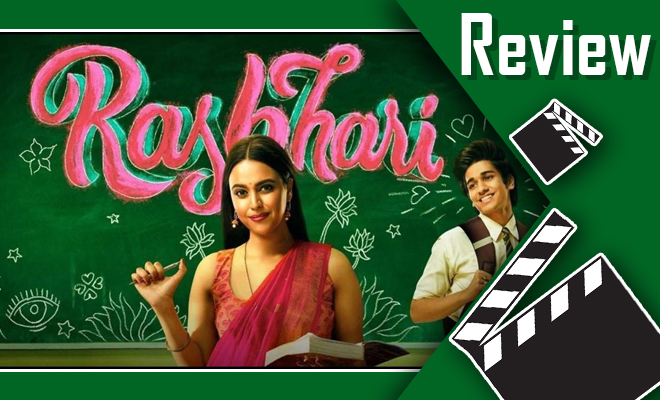 If The Aim Of Rasbhari Starring Swara Bhasker Is To Make You See The World From The Point Of View Of Hormonal Boys, It Wins

If I was ever asked what kind of superpower I would want, outside the set up of an arranged marriage, of course, I would ask that I be able to take a peek into other people’s minds. To know what they are thinking, to know their experiences is fascinating to me. Devious, perhaps, intrusive also but hey, you asked me. It would be particularly interesting if I had this ability when I was growing up, it would have saved me many a heartbreak. The thing is, growing up a girl is like being on a non-stop emotional roller coaster. It sounds like fun, but in reality, sometimes you get off dizzy and sometimes, you throw up. And I am so glad I got to get off that roller coaster with my sanity intact. Or so I think.

Which is why to me, Rasbhari is interesting. This series that is now streaming on Amazon Prime is about sex and sexuality, yes but it is also so unapologetically served from a man’s perspective that it makes for an interesting watch. Of course, I am only two episodes in but already I know that while I was on that emotional roller coaster trying to tell a crush from my eternal love, the guys my age were on a hormonal rampage. For the most part, it’s obvious that sex plays heavily on the minds of teenage men. I mean, I didn’t need a series to tell me that, but I am not hating the education.

The story is told from the perspective of Nand, a character played by Ayushmaan Saxena with conviction. The guy is in school where he is smitten and sporting a permanent boner for his new english teacher, Shanoo ma’am played by Swara Bhaskar. Swara Bhaskar really sinks her teeth into this role, playing a strict teacher and a sexy seductress with ease. But the thing about this series is that is makes you uncomfortable. If that was the plan, it works.

It makes you uncomfortable because it’s so sexual and creepy. And we know the writers and the director want you to feel that way. The camera is often captures the actors, especially Swara, from behind some leaves, or a pole, or at a safe distance, so there is a voyeuristic quality to it. The camera also lingers on Swara’s breasts, and her waist, almost longingly, so that you know that the person at the other end of the camera probably had a pool of drool at his feet. It’s extremely difficult to watch because it’s so deeply sexual and does away with the consent of Shanoo completely.

ALSO READ: I Watched Bulbbul And While It’s A Great Story, It’s Predictable And Not Scary Enough

Shaanu is the talk of the town. And they take this quite literally. The housewives are discussing her, the teachers at the other table whisper behind her back, and every man wants a piece of her. Her house is a hotspot, people want a glimpse of her. And so stories about her and her sexual escapades abound. We don’t know if these are true, mostly passed around by men who having seemingly bedded her. I am yet to watch the whole thing, but I know that there will be points where watching the young guy Nand pursue her is going to not sit well with me. It’s already uncomfortable.

But hey, I am going to watch it and be back with a full review. Watch this space.

A Nurse Recounts An Incident Before The Internet When A Married Couple Didn’t Know They Need To Have Sex To Reproduce. We Believe It