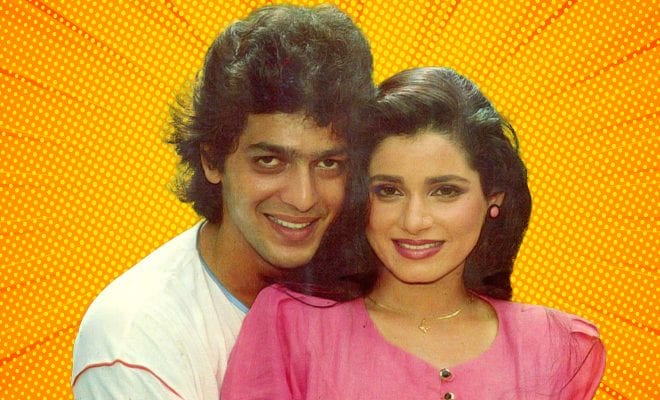 When we’re given our first break, our first gig, or our first job; we want to make sure that we give in our 100%. Especially then when we’re just starting out and are aware of the competition around us. This is especially true for an actor. They don’t just need to learn their lines and get in front of the camera, they are required to know-hows, whats, and whys of most of the things on set. And if you’re a new actor just starting out, the stakes are even higher!

Recently in an interview, Chunky Panday revealed how he burnt Neelam’s leg while shooting a scene for his first film, Aag Hi Aag ( 1987). He remembered telling the producer, Pahlaj Nihalani that he knew how to drive, ride a horse, and even ride a motorcycle – even though the truth was that he just knew how to drive the car.

The anxiety and nervousness of shooting his first film alongside Neelam made him over the top excited – he remembered telling Pahlajji “I know everything.” And when the time came to shoot the scene where he had to take Neelam and escape the wedding on a bike, he dropped her from the bike and her leg got burnt.

Chunky Panday recalls the incident, “Us bichari ka pair jal gaya (She burnt her leg). I felt so bad and I apologized and apologized and it was horrible. So I actually hurt her in the first film with me… She was very strong, she continued because she didn’t break her leg but she burnt it very badly. But she was a very hard-working and strong girl and she just bandaged it and went back to work. But it was horrible… the whole calf had peeled off literally and I’m the culprit because I dropped her from the bike.”

To be honest, we have all been there – a point where we’ve oversold ourselves for either creating a good impression or not look like an idiot. The fact that even after burning her leg, Neelam continued her shoot and finished the movie is commendable.

It just makes one realize that women even back then were not the “touch-me-not” that most of the society tends to believe. When it comes to work and responsibility, we women are as dedicated as anyone could be out there.