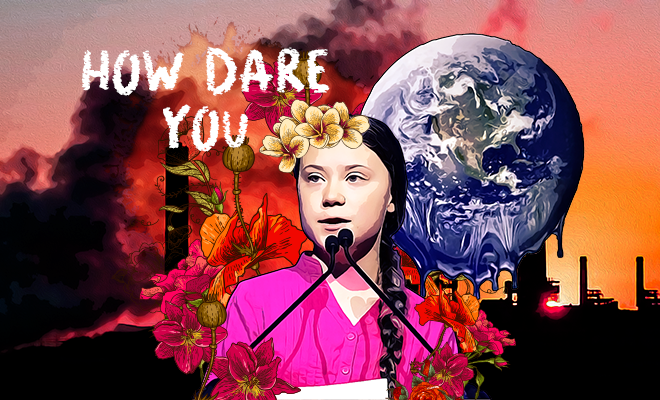 Greta Thunberg’s ‘How Dare You?’ Is The War Cry For Climate Change That We All Need To Hear

Now that I have sort of entered my mid-twenties, all that my parents can talk about is when I would think about settling down and getting married. Now, they aren’t really putting any pressure on me, yet, but are always keen to discuss what kind of guy they’d want me to marry, what the wedding would look like and how many children I would bear. And while I listen, nod and smile to almost everything they say, I am always quick to correct them when they ask me about children, for I have no plans of having kids. For the simple reason that I believe that this world/planet is a really fucked up place to get any children into and chances are that by the time they are even born, we’d have destroyed ourselves and the planet with our callous attitude. An emotion, that isn’t just limited to me, but to many others of my generation, who feel the same way. One of the most prominent ones being Greta Thunberg, whose speech at the United Nations Climate Summit, left everyone shook.

Working towards spreading awareness about the critical condition and contamination of world’s climate, Greta Thunberg has been thoroughly involved and committed in driving a movement to save the planet. Having delivered various speeches at climate rallies and even bunking school every Friday to launch the #FridaysForFreedom movement by issuing strikes, she has been out and about, doing her bit to save the planet. At the tender age of 16, she was listed as one of the most influential teens of the world by TIME Magazine. Which is why, when she recently spoke at the United Nations Summit for Climate Change, everyone listened.

Also Read : Indians Need To Use Condoms Because We’re About To Overtake China As The Most Populous Country!

A video, that is now going viral worldwide, has the young girl strongly questioning political leaders of the world about their actions, or lack there of, and asking them ‘How dare they’ let the world come to a stumbling position. “People are suffering, people are dying, entire ecosystems are collapsing. We are in the beginning of a mass extinction and all you can talk about is money and fairytales of eternal economic growth,” she passionately says.  And honestly, her words resonate with anyone who will lend her a listening ear.

A video, that is now being shared and circulated by numerous celebrities, leaders, influencers and many more, is the kind of a reality check we all dread, but need the most, especially at an hour like this where Amazon forests are burning, pollution levels are rising, glaciers are melting and cities are collapsing. Sonam Kapoor, the Zoya Factor actress, recently took to her social media to share the speech and in turn, also shared 8 simple steps everyone can take to contribute to the cause that needs our attention.

She seems like a very happy young girl looking forward to a bright and wonderful future. So nice to see! https://t.co/1tQG6QcVKO

Meanwhile, Donald Trump, the president of The United States, chose to mock the teenager by tweeting her video and captioning it, “She seems like a very happy young girl looking forward to a bright and wonderful future. So nice to see!” only to get it right back, for Greta wrote the very same line in her Twitter bio and ended up mocking him instead.  Now, is no time for jokes.

It’s time we assume some responsibility and do our bit, while hoping Greta’s speech will urge nations and their leaders to do theirs!

Also Read : Delhi Government Introduces Policy To Limit The Number Of Guests To A Wedding And We Think It’s Awesome