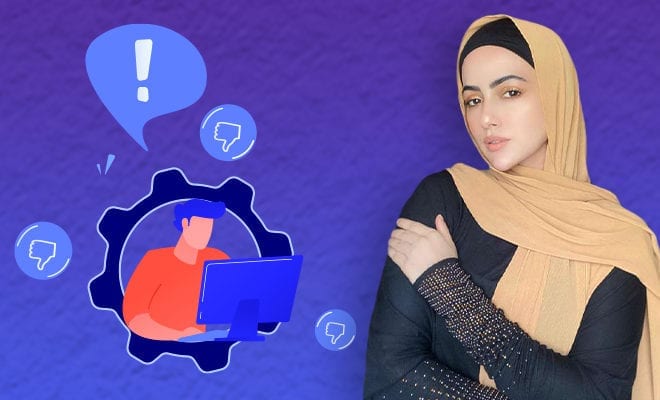 Former Actress Sana Khan Reacted To A Troll Commenting On Her Hijab And Gave Him A Befitting Reply!

Over the past few years a lot of actresses from the industry have seemed to have left Bollywood under the pretext of walking on the path of spirituality and finding their real purpose. One of the most recent ones being Jai Ho actress Sana Khan who has previously made quite a few appearances in Bollywood movies and reality shows like Bigg Boss, decided to quit film industry in October 2020 and just a few months after her exit she got married to Surat based Maulana Mufti Anad Sayied.

Within a few hours of posting the picture, the former actress’s picture started flooding with comments from people, including one in particular who questioned her choice of clothes.

Also Read : Sana Khan Announces Her Exit From The Showbiz To Serve Humanity

He wrote, “Itna padai likhai kast karke kiya faida wohi toh sabke jaisa pardeke andar rahena (What’s the point of your education if you’re going to hide behind a veil) (sic).” And his question was as pointless and unwelcome as his opinion on her choice of wardrobe.

Not shying away from giving her piece of mind to the troll, Sana Khan hit him back with a befitting reply. She wrote, “Mere bhai, jab parde mai rahke… I can do my business, have amazing in-laws and husband what more. I want. Most imp Allah is protecting me in every way. Alhamdulillah. And have completed my education too. So isn’t it a win win situation? (sic).”

Whether or not a woman decides to cover every inch of her body or expose her skin altogether, is her opinion altogether and requires no