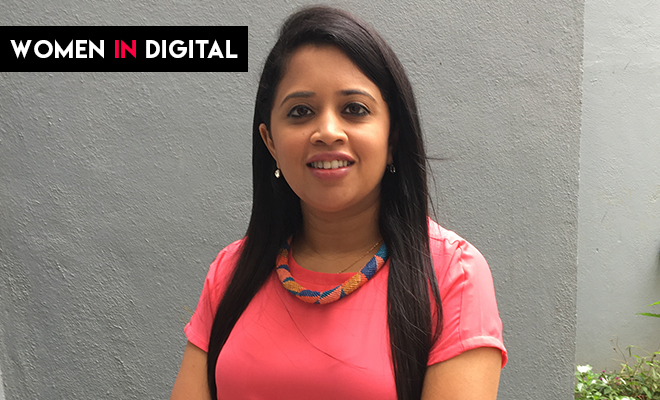 Dhanya Rajendran: “A Digital Media Company Can Be Radio, Print, and TV Rolled Into One”

When Bangalore-based journalist Dhanya Rajendran was thinking about returning to work post a sabbatical, she didn’t really feel like she had many choices. As the former South bureau chief for the news channel Times Now, Rajendran had reported extensively on Indo-Sri Lanka politics, human rights violations, and corruption, among many other subjects.

Feeling slightly disillusioned by the options out there, she decided to dive head first into the digital arena and launch The News Minute. Co-founded in 2014 with husband Vignesh Vellore and veteran investigative journalist Chitra Subramaniam (best-known for her exposure of and in-depth coverage of the Bofors scam), TNM focusses on curating news and content from the five states of Southern India, and is today counted among the most credible independent news portals in the country.

So much so, that Quintillion Media Pvt Ltd — a company founded and run by media veterans Raghav Bahl and Ritu Kapur — decided to invest an undisclosed sum into the fledgling company within a year of its inception. Clearly, they were doing something right!

Dhanya talks to Hauterfly about how it all started, and how TNM has evolved into a reporter’s platform that focusses on telling stories instead of sensationalising every issue.

After almost a decade in television news, the only two choices I had when returning from a break was to go back to TV or print reporting. With the decibels on TV increasing, and the scope for reporting shrinking, I believed it was time to look for something different. Though I was completely unaware of how digital sites worked, the idea of HuffPost intrigued me. Initially, I thought of The News Minute as a news aggregator that would pick and choose the best stories the Indian media was doing, especially from the South, But within a few months I realised that people were more interested in reading our own reporting or perspective on a story. Slowly, TNM evolved into a journalism venture that reported from the five states in South India.

Tell us a little bit about what makes your company special/different.

Digital media sites in India are largely run by mainstream media organisations that run newspapers or TV channels. For many years, the digital wing was a mere extension where stories from TV or print were reproduced. As far as digital-only media ventures are concerned, there are very few who do original reporting. These sites thrive on churning opinion and analysis. TNM, with its limited resources, is a reporter’s platform — a platform that tells stories.

At what point in your journey did you realise you had something special on your hands?
When I first thought of launching a website with my co-founder Chitra Subramaniam, I did not even know what web servers were. The digital world was an completely unfamiliar entity to me. We struggled to understand the dynamics of a reader in the digital world, and at many points in time were unsure of where we were headed. Just as we were completing a year into the venture, we got a query from a media house who wished to acquire us. This is, perhaps, when I first realised that we had struck a formula and others were thinking of emulating it.

Starting a company is no easy feat. What’s been the most rewarding part of the process?
It is the satisfaction of knowing that at some level, you are touching lives — whether it about the people we write about, or the people we have been able to employ.

Where do you think you’ve had your biggest struggles, and how have you overcome them?
I treat everyday as a struggle, as a new challenge. While in the beginning the struggle was to understand the medium, the task later was to ensure that we remained different. Today, the struggle is to grow and reach out to larger audiences. There is also the struggle to tell better stories, to report on the many things that are ignored. Every struggle is overcome with positive thinking, a belief that there is light at the end of every tunnel.

Any challenges you face as a digital company versus a legacy media publication? How do you think you score over legacy media?
I think a comparison to legacy media is unfair. We are comparing a startup with 22 people to mammoth organisations that have more over 600 people working across many cities and timezones. I believe it is this difference that makes small digital ventures different from legacy media. With the burgeoning size of an organisation, there are compromises that newsrooms are forced to make. But as far as India’s independent digital media goes, there are no such compulsions, there are no stories that cannot be told, no Omerta code to follow.

What, in your opinion, is the best thing about being a digital company?
A digital media company can be radio, print, and TV rolled into one. The avenues of storytelling that the digital medium provides are unparalleled. As for reaching out to the audience, digital is more easily accessible to millions in the country.

If you had to go back and start over, is there anything you would do differently?
The courage to start a venture isn’t enough, it is important to have an idea that will work. I am a journalist, so I don’t devise business plans. But I believe that understanding how your product will be different from what is out there in the market is important while starting a venture. Today, TNM stands for reporting from the South. Everyday, we work hard to carve a niche for ourselves, but sometimes I wish I had planned this journey better! At first, we aimed to be an aggregator, but junked that plan quickly. What TNM does now is more satisfying for me as a journalist, but it did not start that way.

What else can we expect from your website in the future? Where do you go from here?
I believe the way forward is to go vernacular. Though a large percentage of online readers in India are comfortable in vernacular languages, there are very few independent media ventures that cater to this audience. Except perhaps in Malayalam, this is a large avenue that has been left unexplored.