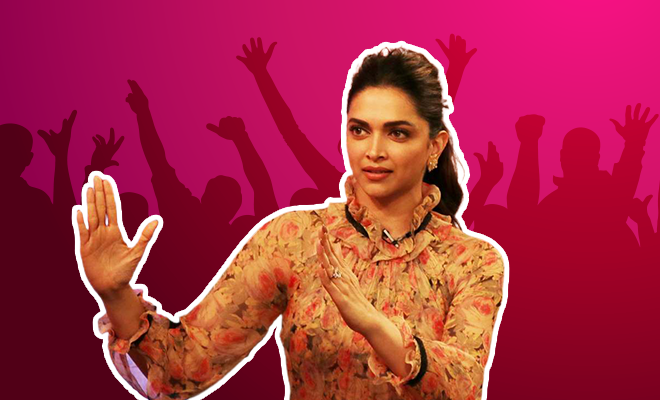 Deepika Padukone Gets Mobbed While Leaving A Restaurant And Struggles To Secure Her Handbag. How About Some Personal Space?

Lights, camera, glittering events, fame, stardom, luxury cars and fancy vacations, that is all that we, as mango people, see in celebrities who live a seemingly OTT and comfortable life. For us, they are all about living life king size, but what we often tend to overlook is how all that glitter is not always gold. Being in the limelight might have its own perks, but more often than not it can get a little too overwhelming. Especially when the concept of personal space is still lost on public when they spot a celebrity. Padmaavat actress Deepika Padukone recently had a rather disturbing encounter while she was leaving a restaurant and got bombarded with paps and fans who spotted her.

At first, the actress kept calmly making her way through the crowd but was soon seen getting flustered as a group of women got a little passive aggressive in pulling her bag to garner her attention.

Deepika Padukone had met husband Ranveer Singh for dinner after wrapping up a shoot in the city. As the actress was leaving the restaurant in her denims, crop top and sporting a red hand-bag, she was surrounded by a bunch of fans. The incident was recorded on a video that is already making rounds on the internet,

Also Read : Guilty Or Not, Nothing Justifies The Media Mobbing Rhea Chakraborty. The Invasion Of Her Personal Space Needs To Stop

Maintaining her cool and smiling her way to the car, everything was under control up until the point where Deepika felt someone was tugging at her bag. In a fraction of a second, Deepika could now be seen panicking as a woman hawker who was trying to sell her something started to pull at her to catch her eye.

Within seconds, her security detail rushed in and secured her way to the car, where Deepika finally took a sigh of relief. Although the actress has always been kind and polite to fans and paps alike, we can imagine her fright to get mobbed by a crowd unannounced. Perhaps this is where we remind ourselves that celebrities too are humans just like us, and would rather value their personal space not getting invaded.

Meanwhile as the video made rounds on the internet, Deepika Padukone also got called out for not wearing a mask in a public place, especially during a time when the number of Covid cases are once again on the rise.

Also Read : Yami Gautam Moved Back From A Fan Offering Her A Shawl. She Called It An Act Of Self Defense. We Can Relate