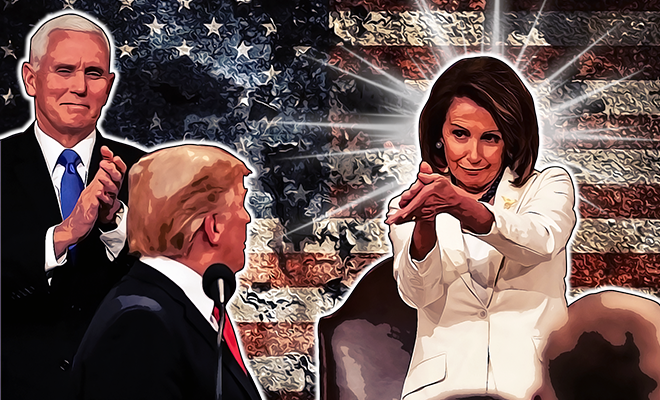 Nancy Pelosi And Her Subtle Savagery Is The Need Of The Hour. We Love Her Sarcasm.

One thing that men in power hate more than losing power itself, is losing it to a woman. Raised and poised to be fierce misogynists the best or rather the worst example of this would be President – Mr. Donald Trump. Nancy Pelosi, the Speaker of the United States House of Representatives has initiated an impeachment enquiry against him. And from the looks she is one of the strongest force to be reckoned with right now.

These people are few of the most powerful politicians of today and their raging war isn’t recent. Nancy Pelosi stood up to President Trump, without really being anti-Trump and it is not just commendable, it has perhaps been one of the most effective ways to maybe get him to listen. Pushing Trump’s buttons, one meeting, one grand gesture at a time, Nancy Pelosi has risen to be a woman you wouldn’t just want to look up to but also learn a great deal from. From how to dismantle a troubled misogynist man in power, for one to doing it without stooping down to his level of taking random baseless digs, this is a lesson in doing it right.

The recent one being, where Trump after a White House meeting posted a dramatic picture of Pelosi, addressing a room full of men as the only woman, pointing fingers at Trump. He captioned the picture, “Nervous Nancy’s unhinged meltdown!”, but little did he know that Pelosi would embrace it in the best way she could – using it as a statement and putting it up as her Twitter cover. In fact, the picture depicts just how powerfully she is standing her ground, is being called a ‘work of art’ by many, and we don’t disagree.

Much like a political rendition of ‘When life throws lemons at you, you grab some tequila.” Which is also the approach that was adopted by child activist Greta Thunberg, when she decided to make Trump’s tweet about her, her twitter bio. Guess the joke’s on him!

This is also not the first time that Pelosi has used Trump’s own actions against himself. Back during the time of his Union Speech, Pelosi gave birth to the iconic slow clap, that mocked him when he spoke against the ‘politics of revenge’, once again making her point without using much words. Then in September, Nancy Pelosi had again said enough with just a slight gesture of her ‘air quotes’ when she was questioned about the President’s views on gun reforms and she said, “you want me to tell you what goes on in the presidents… ‘mind’?”

Another time, after what had been a shouting match between the two, that resulted in a heated meltdown on Trump’s part, he shouted words about ‘shutting down the government’ to get his way on the matter of the wall on the border with Mexico. It once again became proof that the guy running the government does not just crack under pressure, but will resort to dirty games and cat-calling when his tantrums don’t work. Pelosi shut him down in an epic way, smirking in a coral coat, which has since became a movement on its own.

One by one, knocking over all the cards held by Trump and playing the impeachment card with a calm and composed mind, Nancy Pelosi seems to have found what buttons to press to get her way. Possibly the only time we’d be saying this, but we are glad that thanks to Trump, we finally have such powerful women coming to the fore, reminding him and every other guy in the world, of just how well we too can play with tact.

And if I were Trump, I’d be sleeping with one eye open. Because from the looks of it, there is no stopping her.

Also Read : Melania Trump Has The World Watching Her Fashion And Her Style Is As Controversial As Insensitive