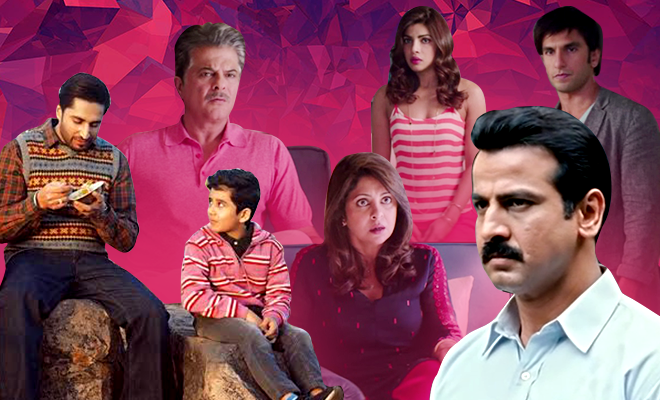 My Dad Forgets My Age And Is Too Awkward To Have A Heart-To-Heart. Why Are Indian Fathers So Absent Emotionally?

We live in times where a person’s worth is judged by their work and the kind of money they mint. I have seen people being bitchy to everyone else except to those at the peak of their careers. I have also seen people working super hard on their professional lives but paying little heed to growing their souls. What is the role of a stay-at-home mom in the middle of all this? She is taken for granted and the father, being the provider is considered the head of the family. And that is unfair because it’s actually the mothers who run the family and take ownership of, well, literally everything.

My mother too is a homemaker and she has raised three daughters, with little assistance from my dad. When I was two, she had to undergo a surgery but that didn’t stop her from taking care of me. In fact, in her absence, it was my grandmother who stepped in till she recovers. And this brings me to my point, why are Indian men such absentee fathers?

Recently, Neena Gupta who conceived Masaba Gupta out of wedlock, said that if given a choice she wouldn’t have done that now. She said that a child needs both the parents and missing one has had an effect on Masaba. And that made really think…does being married guarantee that the father will actually really be there? Because I feel my dad has barely been involved in the actual things that made me the person I am today. Yes, he paid my tuition fees but did he know the subjects or chapters I struggled with? My mom did. He filled in the monthly ration but did he know the flavour of Horlicks I liked? My mom did.

I am not undermining the love Indian dads have for their children. He is working hard to give his family a more secure future and that kind of dedication comes out of love. He too has made sacrifices for his family. But what I am saying is, that when it comes to really engaging – emotionally and mentally – the typical Indian father falls short. Why do you think so many adults have daddy issues? Something to think about.

It seems like giving emotional support just a mom’s job

When I was a baby and I cried over like I don’t know, random things babies cry over – it was my mom who held me and talked me out of that crankiness. Cut to today, when I am upset over a boy or having existential crisis, it’s still my mom who will whip up my favourite dish and have a heart-to-heart. In fact, she understands me so well that she lends emotional support even without words. If I go and share my mood swings with my dad, he will probably be frozen and not know what to do with me. Maybe he will assume I am PMSing and order me a tub of ice-cream, which isn’t so bad but it’s nothing in comparison with an actual conversation.

Yes, I get that traditional society conventions dictate that dads or men be strong and resilient and not show one sign of emotion, but perhaps this handicaps them from providing any kind of emotional support to their children. And sometimes, their wives.

My mother knows all my friends and my entire dating history. My friends can have independent long conversations with her and so she knows what’s on in their lives too! Of course, my dad is more conservative and wouldn’t like to discuss my dating history, even though he is aware I date. He just gets too awkward to ask me these things directly while my mom laughs with me on my exes.

With the dads, it’s often a cursory, awkward hello when a friend drops in to the house. They often forget what this friend’s name was or what they do. With the boyfriends, if they do drop by, it’s more of a quick rundown of what he does and if he seems decent after which the mothers take over to make the guy even slightly bit more comfortable. I can never see my dad sitting down and having a conversation with a guy friend. And what’s so weird about that anyway? I don’t get it.

Our dads don’t even remember how old we are…

Has it ever happened to you when you were in school that your dad had no idea which class you were in? My dad could never figure out which class I am going to and always guessed it wrong. It’s so common that this forms the basis of several dad jokes! In fact, I think he didn’t even realise when I got done with my Masters. But in some ways, he not remembering my age worked in my favour. So when my grandmom started telling my parents to look for a groom for me, my dad was like she is just 23, when I was umm 26. How does that even add up? When did he think I completed my graduation and post-graduation? At 19? Indian dads I tell you!

But here’s the bigger thing. While it’s laughed off, that the dads don’t know much about their children, why are they offered so much leeway? This assumption, or actually pattern, we work with which implies that since they are so mentally engaged at work, they need not even fully be present at home is a stereotype that needs to die and quickly. Moms have multiple things they do too – from homework to laundry to budgeting, they do it all and yet no one let’s them get away with not investing their mental energies at home or at work. Why?

When mothers are away, Indian fathers struggle to just get basic things done

When I was watching Panga, this is what was going on in my head. When Jaya goes to train for kabaddi, leaving Adi with his dad Prashant, all hell breaks loose. He struggles to even do the most basic tasks like cook up an edible breakfast, not make a fool out of his child at his school function and even on consoling the kid after he did just that. It’s like asking an engineer to perform a surgery. But a father is a parent too and he should be equipped to do all these things, at least after years of experience!

This probably boils down to the women, really. From the time a son is born in an Indian household, he has practically everything done for him. Heck, Indian mothers would allow their sons to shit on their hands if the son claimed it was too much work to go to the loo. This is inept man-child with zero life skills is then handed over to the wife, who continues to do stuff for him, mainly because this guy wouldn’t be able to stay alive if left to his down devices. So actually, if we are setting them up for failure since they are born, does it come as any surprise that this guy can’t do jackshit on his own?

Dads just get to be the fun parent

So this is the structure of an average Indian society — moms take on all the difficult tasks and dads get to be the fun parent! For instance, Kunal Khemu recently revealed that he is the fun parent and Soha the disciplinarian. “I have not changed many of Inaaya’s nappies. Soha does the entire tough job, I only do fun stuff with her. I am saying that a woman is more capable of doing more difficult jobs. I have seen my mother do a lot more than my father; I remember my mom used to spend more time with me. But fortunately or unfortunately, the most fun time happens with the fathers only,” he said. I mean it’s not cool to just say that a woman is better at handling difficult jobs. Men can change a punctured tire but can’t change nappies? Wtf even?

He further added, “I like travelling a lot; last Christmas we went to Australia. So when we are travelling, I take her to different parks and gardens and other scenic locales. I enjoy such play dates where us father-daughter can enjoy amongst ourselves.”

Basically, except when it maybe comes to disciplining, the father is absent as a figure from the Indian child’s life. Then, when they have to go out or be given money, the dad steps in as the hero. But is he the hero? Or only playing at it?

Why do we require our fathers to put in zero emotional investment?

ALSO READ: Neena Gupta Says Masaba Suffered Because She Didn’t Have A Father Around. But Even When Indian Fathers Are Around, Are They Present?

Why am I realising these things now? Because we are adults and this shows one of the many ways that our society is imbalanced, and not in favour of a woman. Tomorrow if and when I get married and have children, I would want my husband to be really there for the kids…not just financially but raise them whole-heartedly. I want a husband who will change nappies, really get to know the child in and out and be an emotional support. I don’t want my child to have an absentee father and daddy issues. And we as millennials have to change the family structure that is so flawed!