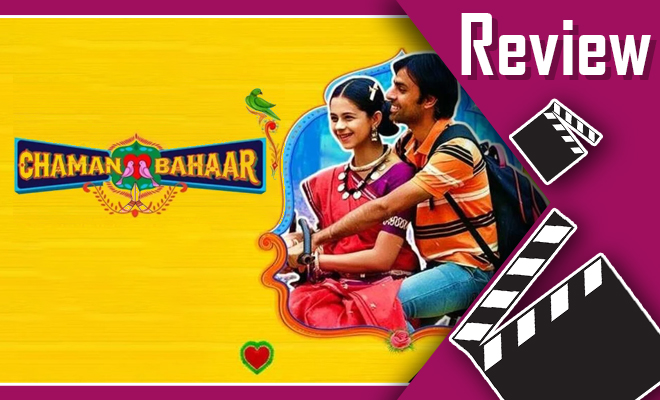 Chaman Bahaar Is A Movie That Normalises Stalking And Predatory Behaviour In Men. The Actress Is Treated Like Furniture

Over the weekend and mostly out of sheer boredom, I watched Chaman Bahaar on Netflix. I understand that you have many questions but the one that’s right at the tip of your tongue, is why? I don’t know. I mean, it’s not like I’m looking for great entertainment on OTT platforms anymore, I have watched most of what there is to watch, and then some. So when I stumbled up on this, which, trust me, my viewing habits should not ideally recommend, I decided to watch it.

I shouldn’t have. And you will be better off if you don’t. This is a movie that, if you’re a woman, will dumbfound you with the intense stupidity. And if you’re just a human with better sense the director, this will make you uncomfortable, like you’ve got a wedgie.

The entire movie is based in a dusty, hot town- the limits of which are constantly changing. What this has to do with the movie and the setting, I do not know. It’s not like it affected the outcome too much. Or at all. Jitendra Kumar is Billu and he gives up a potential job, one that has been coveted by generations in his family, as a person in the forest office to run a paan shop. Yes, I also did not see the appeal but then I didn’t even see the appeal of the whole fucking movie, so let’s not go by what I wanted to watch.

Billu’s paan shop is located opposite an unoccupied house and business is slow. He has two friends (assholes!?) who come around suggesting crappy plans, telling him his business probably won’t work. We don’t know who these guys are but if they are supposedly friends, they are doing a shit job of it.

Once an officer moves into the unoccupied house with his family, things start looking up for Billu’s shop. The officer has a daughter, one who is young and in school and she catches the fancy of all the men in the area. And so, to catch a glimpse of this girl, all the men waste time at Billu’s shop. And here is what gets my goat. This girl, her entire character, her entire role in the movie doesn’t allow for one single dialogue. The girl doesn’t open her mouth! Why the fuck is this a thing in 2020?

I think the writer Apurva Dhar Badgaiyann wanted to show how men in small towns can be, how a girl in shorts can become the talk of the town but it’s done in such a creepy manner, I was surprised the parents in the movie didn’t ask for police protection immediately.  No seriously, there are men who are following this girl, a school-going girl, on their bikes and their scooters and even in their cars and this is dismissed off as just something that’s okay.

It’s not okay. This is a girl. The people following her are fully grown-ass men. This shit is scary. This is stalking and the kind that should be called out. The movie stays away from sexual tropes, any man who talks about the girl is immediately silenced so the audience is constantly reminded this is an innocent one-sided love story. But let’s get this clear, just because you make the girl’s hair fly, it does not take away from the fact that this is a flatout creepy mess of a movie.

At some point, even the teacher confesses to having a crush on the girl and at this point, I retched. The writer and director do attempt to layer the proceedings but nothing that will manage to capture your interest. Frame after frame is filled with men and petty politics and stupid notions of masculinity and none of it, even vaguely, adds fun.

But really, the single most annoying thing in this movie is that I am more than 640 words into this review and I haven’t mentioned the girl’s name even once because she’s literally a pole to lean on for the narrative. She could be anyone. Because seriously, how difficult can it be to walk across the screen, ride a scooter, walk across a screen again, but this time with a dog in tow? Yeah, I don’t see her winning an Oscar for this nuanced performance. But this is entirely the fault of the writer and director who decided her story was unimportant. Because if a girl wears shorts and has long hair that flatters her just right, what is the need to give her anything to say?

Three Young Guys Demanded Sexual Favours From A Minor Girl And Threatened To Release A Video Of Her Bathing. She Set Herself Ablaze