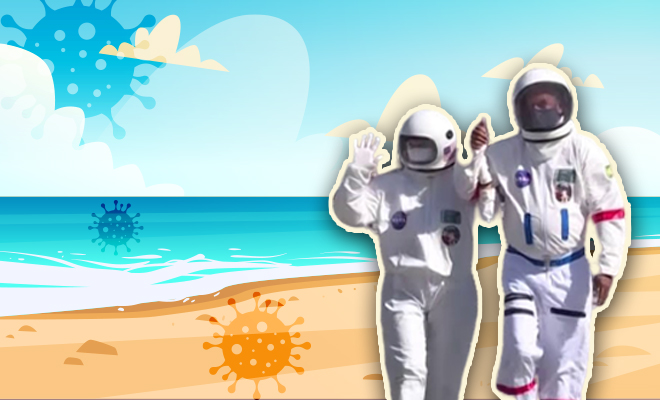 Brazilian Couple Wears Spacesuit To The Beach To Protect Themselves From Coronavirus. We’ve To Applaud Their Out Of The World Thinking!

Since I have been a relationship, there have been numerous occasions when I have found myself twinning with my partner, and without any pre-discussion or effort into making it happen. Call it a colour co-ordinated co-incidence or just a great hue understanding between us, but instinctively turning up in same colours has now become all too natural for us. And while we agree that we might not be the only ones out there dropping such couple goals (though we are plenty proud of it), there is definitely one couple in particular that has suddenly upped the stakes, and taken twinning to a whole another level.

This after a Brazillian couple went a little out of the box, or better yet – ‘out of the world’ in their wardrobe choices, after they both chose to sport spacesuits to the beach, in order to shield themselves from the threat of coronavirus, that still looms large over everyone’s heads.

With Brazil being one of the most affected and lethal hotspots for Covid-19, people there can’t be cautious enough. And a testament to that very statement have been Tercio Galdino and Alicia Lima, who were spotted wearing a spacesuit along with custom made helmets while they were taking a stroll by the beach in Rio De Janeiro on a bright sunny day. Guess a little bit of creativity in such glum times never hurt anybody.

Also Read : This Couple Salsa Danced On The Sidewalk While Maintaining Social Distancing. This Is Proof That Everything Is Going To Be Okay

Brazilian ‘astronaut’ couple dons space suit to wear on a stroll to the beach pic.twitter.com/T4IYAAdE4n

Gauging the seriousness of the virus and the fact that it is spreading faster than the speed of light in some areas, the couple decided to max up on their precautions while stepping out of their house. And honestly, no matter how extra their appearances might have looked, that too for a beach day, we can’t help but laud them for going the extra mile in keeping themselves and those around them safe and protected.

Galdino, who is 66 and an accountant shared how his wife was hesitant in the beginning to sport the suits in the streets, but soon came around to the idea of having an adventure in the streets. Tercio also shared how he suffers from a chronic lung disease, which gave him all the more reason to practice caution and how. Guess the couple was looking for nothing more than a platonic relationship (pun intended) with the virus, and seems like they got one, as they managed to stay safe in their gear.

Also Read : In Tamil Nadu, A Woman Dressed Up As A Goddess To Spread Awareness About The Coronavirus. Because Only That Makes People Do The Right Thing