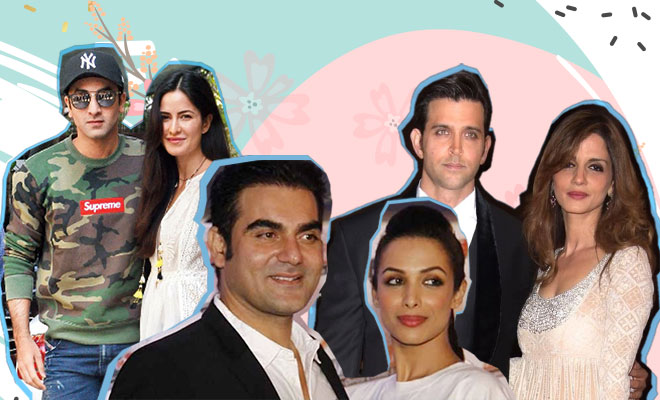 Can You REALLY Be Friends With Your Ex? These Bollywood Celebs Say Yes!

When you’re in a relationship, you give it our heart and soul. You build memories; you make your SO a major part of your life. But what happens when it doesn’t end up working out? In order to move on and fan your egos, you add him to your burn book and basically trash talk him to kingdom come. But think about it; isn’t he the same person you once, forget loved, but also liked? Bollywood couples seem to be actually setting a pretty good example right here, burying the hatchet and learning to be friends with their exes. If you ask us, we’re pretty inspired.

Here are some Bollywood couples that are making us want to the build bridges we once burnt with our exes.

It’s been five years since Hrithik and Susanne parted ways, but they have managed to stay friends all these years. Recently, they were spotted along with their  kids and Rakesh Roshan outside a theatre in Juhu, Mumbai, having a family outing together.

Earlier too, they have been spotted at movies, dinners and family get-togethers. The ex-couple has very gracefully handled their divorce, without letting it affect their children. In fact, during the Hrithik-Kangana controversy, Susanne Khan supported her ex-husband, unabashedly. Such inspo!

Deepika may have suffered major heartache when they initially broke up, but the strong woman that she is, she has come a long way since then! She is happily married to Ranveer Singh (the national prince charming!), and Ranbir too has moved on. The couple has no hard feelings for each other and are super comfortable even working together. After Tamasha, the duo is all set to shoot for Luv Ranjan’s next! In fact, recently, Deepika Padukone was seen spending some quality time with Ranbir’s parents!

While Neetu Kapoor shared a picture of them on Instagram, appreciating their time together, Deepika too shared a picture of a stunning bracelet she received from her. We aren’t sure why there was so much coldness between them earlier, but now it seems like Ranbir’s parents too have started to make amends!

In fact, Alia Bhatt went ahead and liked the picture too! Such good vibes! *Zen mode activated*

A long marriage and a kid later, when Malaika and Arbaaz announced their separation, nobody knew how to react. From disbelief to finally accepting the truth, it’s convincing the people around you that makes it even more difficult. Arbaaz Khan recently opened up on a show and said, “Everything seemed fine but it crumbled. Things don’t work out, and it’s only fair that two people who want to take their life in their own hands will take that decision.” They are co-parenting their child Arhaan. Both of them have moved on with their respective lives. While Malaika is dating Arjun Kapoor, Arbaaz is going strong with girlfriend Giorgia Andriani. They even attend the same parties and share a social circle.

Watch Malaika Arora opening up about her divorce, in conversation with Kareena Kapoor.

The cordial exchanges between Katrina – Ranbir – Alia left all of us with our jaws dropped. Though we could sense a slight awkwardness, the fact that they are being cordial is more than enough. We remember the times when Salman Khan and Aishwarya Rai would completely ignore each other’s presence on the red carpet – the kind of moments media would feast on!

But we are in an era of friendships now! Katrina opened up in an interview with DNA, and said, “I’m not some extra-terrestrial being. I do go through my own share of pain and angst. But I see no point in holding a grudge.”

Katrina Kaif, has worked hard on herself and we see how positively she has been handling the ups and downs of life. Even Hrithik Roshan agrees!

He commented on a video shared by Kat on her Instagram, saying, “And she is coming into her own. This is fab.” Way to go girl!

ALSO READ: Katrina Kaif’s Advice On Dealing With An Ex Is Something We Could All Use

We love how Bollywood is becoming one big, happy family, with people so supportive of each other. White flags everywhere!