Bhumi Pednekar Says She Doesn’t Mind Item Songs But Will Not Work In Anything That Involves Objectification Of Women. We’re Confused 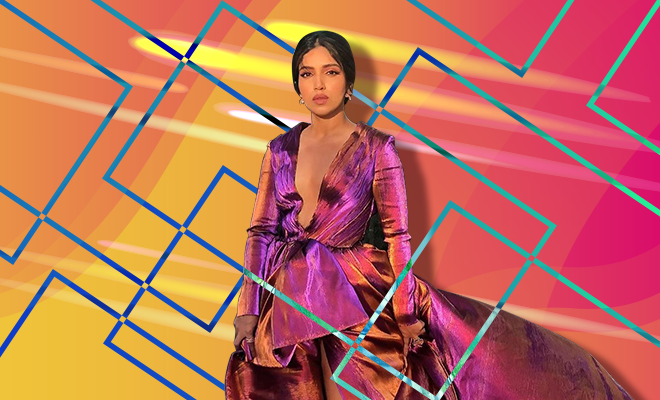 It gives me great pleasure to say that Bollywood has reached a point where change is possible. People are more aware, movies are being pulled up for their ridiculous content and the actors are bettering their ways. And mostly because people like us are talking about the content. There was a time like 5 years ago when hope was bleak. There was an influx of utterly shitty content and item songs with lyrics so bad it would make your ears bleed. Check our Throwback Thursday stories, we had a relook at some of the old songs there and it’s appalling. But things get worse before they get better, right? Or so that has been the case. And talking about this is Bhumi Pednekar and we are absolutely loving it.

Despite being only six movies old in the industry, the 30-year-old actor has carved out a niche for herself. She has also set the path for future actresses who want to contribute to the feminist movement. She debuted by playing an overweight girl in Dum Laga Ke Haisha, she went on to play a wife fighting for a right as basic as wanting to poop in peace in Toilet: Ek Prem Katha, and then she starred in Saand Ki Aankh where she played a 65-year-old sharpshooter. And most recently, she was seen in the movie Bala trying to fight the dusky skin stereotype. Looking back at her track record, I think it is very safe to say that she likes to take the road less taken.

In a recent interview, Bhumi was talking about how she wouldn’t do a movie where women are objectified, even if it just for an item number. She says, “I love dancing and I’m not against item songs, I don’t have a problem with women wearing bikinis on screen. In fact, I’ll be wearing one on screen someday. But when women are made into objects of glamour, that is something I don’t want to do. Today, a hero or a heroine is a person that inspires anyone to be or do better. I don’t think it has anything to do with the way you look.”

Though we agree with what she is trying to say, we can’t help but notice the contradiction in the statement. I mean, in their very essence all item numbers objectify women. It is always a woman clad in tiny clothing dancing in front of a hoard of men. Item songs don’t play a large role in taking the plot of the story forward either. So when Bhumi says that she doesn’t mind them as long as they don’t turn women into objects of glamour, it confuses us a little. But we definitely agree to the part where she says the hero or heroine inspire people. After all, movies are the largest medium of influence. The way a character behaves in a mainstream Bollywood movie shapes thousands of minds. Which is why we are so glad actors are now being conscious of what role they play. Rather than just focusing on how their character looks or even which movie gives them a larger paycheck, it’s more about the meat in the role now.

Bhumi goes on to say, “I’m not comfortable doing a film where the hero is smacking a girl’s butt and the nation is celebrating it. I can’t be a part of a film that is anti-feminist or women bashing, or something that is out of my moral comfort.”

More actors should understand this, especially those that sexually objectify women in movies and try to pass it off as a joke. No one is laughing anymore! Why women have put up with this kind of behaviour for so many years, baffles me. But at least now someone is talking about it, initiating a ripple effect. So, thank you Bhumi!

On the work front, 2019 has treated Bhumi very well. Despite many controversies, two of her movies that released this year-Saand Ki Aankh and Bala performed extremely well on the box office. She is all ready for her next release, Pati Patni Aur Woh which will hit theatres on December 6th.