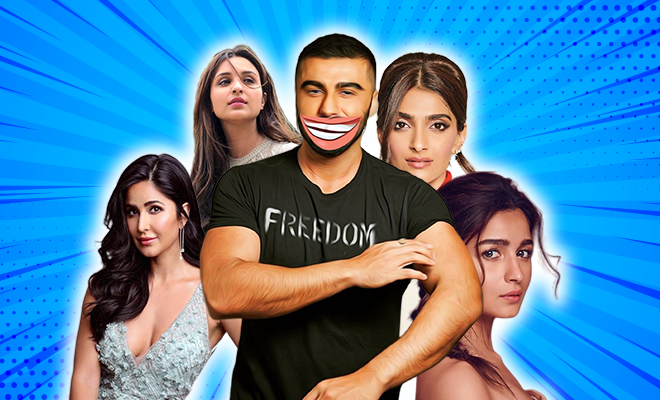 Arjun Kapoor Is Bollywood’s Friendly Troll And These Are Some Of His Sassiest, Funniest Comments On Other Celebs

We all have at least one friend, whose sole communication style is to pull your leg, and guffaw loudly at their own jokes. You can expect them to take a hilarious take on the most unexpected things. Compliments from them are so rare, they can be declared to be in the same subset as endangered species. You upload a flaming hot picture on Instagram – which was the result of a lot of effort – and wait for the compliments to pour in. And then they just bring their sarcastic ass on your post and write something not even remotely related to the picture or caption, but one that’s an inside joke. Arjun Kapoor, is that friend in Bollywood fraternity. He is always trolling celebs, and Katrina Kaif, Alia Bhatt and Parineeti Chopra seem to be his favourites. But the thing is, he is the kind of troll that makes you laugh, instead of pissing you off. His comments are hilarious AF, and he indulges in fun banter that can make your day…most of the times. I am sure, sometimes his famous friends feel annoyed but the best part is…he can take a joke on himself too! Sit back with some popcorn and enjoy some of the funniest moments from the book of – Arjun Kapoor the friendly neighbourhood troll of Btown!

1) When He Said Katrina Kaif Has Dandruff

Arjun Kapoor and Katrina Kaif often indulge in witty conversation on Instagram, with mostly the former pulling the latter’s leg. However, this one is literally the funniest Arjun has been! So Katrina Kaif had posted a BTS video from a shoot, in which she looked smokin’ hot. She was seen flipping her hair and for effect there was some powder thrown in. Kaif captioned it: “Powder and earth”. While everyone was flipping over this gorgeous avatar and dropping praises, Arjun decided to say that Katrina has dandruff. What the fuck even? I died laughing at this one.

2) When He Pulled Alia Bhatt’s Leg On Raksha Bandhan

Alia uploaded a picture of her celebrating raksha bandhan with Karan Johar’s son Yash. She wrote a warm caption: “My beautiful baby brother!!! Aaaaah just look at that faceeeeee.” So of course, Arjun had to ruin it, just for the kicks! He wrote,  “Ummm he’s not really that excited btw” Such an ass!

3) When He Asked Sonam Kapoor To Give His Suit Back

We all know, Sonam is quite a fashionista. She is known for her androgynous looks and dons suits better than the lead characters of Mad Men. So when she posted a picture of her in an oversized brown blazer, Arjun Kapoor totally missed the point. He commented saying that he wants his suit back, insinuating that it’s so loose, it’s like she is wearing a man’s suit. I mean, come on Arjun! That’s what my dad would say, without actually having the intention of trolling me.

Arjun really likes to ruin the fun posts his friends put up. So when Shraddha shared a still from Saaho, filled with drama and charm. Except, Arjun called it a “hectic sneeze reaction.” Omg. I would have added him to my hit list, after laughing, of course.

ALSO READ: Katrina Kaif and Arjun Kapoor’s Witty Internet Banter Is Proof That They Are Really Good Friends. We Love It

5) When He Created A Meme feat. Parineeti Chopra

Kapoor went one step ahead for this one! He legit created a meme that said, “when it’s been 6 years and she is still mad at you.” I mean, Arjun why do you do such things then?

Hrithik Roshan Calls Katrina Kaif A Mazdoor But It’s Not For The Reasons You Think!