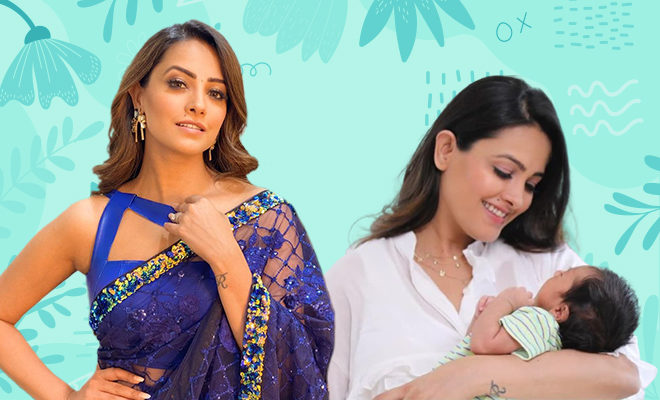 I am no expert on motherhood. What I do know is that I was 6 months old when my mother started working again. She loved her work so much that she found a way to balance her career and motherhood. It worked for her but of course, like most Indian women she was made to feel guilty too. People are under this notion that once a woman becomes a mother it’s the end of her career. That’s not necessarily true. It’s a personal choice, not a compulsion. Yes, women can make those too. However, up until a few years ago, if you were an actor in Bollywood, becoming a mother or even getting married would mean that you wouldn’t get as many movie offers and when you do, you’ll be seriously typecasted. Numerous celebrities have spoken up against this. Thanks to that, actresses no longer need to worry as much about their personal lives affecting their Bollywood career. Recently, actress and new mommy Anita Hassandani opened up about this and we love her candidness.

In a recent interview, Anita Hassanandani, who just gave birth to a baby boy, Aaravv, earlier this year, said that within the Bollywood industry, the perception of celebrity mothers is evolving. She said that when she does decide to go back to work, she will be shoot in no time because now actresses can be working professionals and mothers at the same time. We are glad that times are changing and the Bollywood industry is changing along with it.

Anita said in the interview, “Women themselves are multi-taskers and I’m glad that the industry sees that and understands that a woman can be an actor and a mother at the same time. I’m sure the day I decide to get back to work, in no time I’ll be shooting. It’s all evolving. I feel all the men are realising the fact that women and men stand on the same page. As soon as a mother wants, she can get back to work, not only acting per se but in any industry.” Further adding, “Honestly, when I was pregnant I told Rohit that I’m going to be at home maximum for 2-3 months and then I’m going to get back to work because I have been working since the age of 16. And, Rohit also understood at that point and told me not to worry and that ‘we’ll figure out and manage.’ But since the time I have had Aaravv, I swear work doesn’t even cross my mind.”

Also Read: Anita Hassanandani Talks About Getting Pregnant At 39 And How She Managed To Keep It A Secret

Rohit Reddy, Anita’s husband seems like such a supportive partner. That’s all that matters at the end of the day, isn’t it? In the interview, Anita said that he has been an amazing and hands-on father. She said that even when she decided to get back to work, she knows it will be smooth sailing because they’re practising equal parenting. And hence, every time Anita is asked when she’ll get back to work, she always says “I’ll go with the flow” because she doesn’t want anything to ruin the time she is spending with her infant son.

Anita said in the interview, “When I was pregnant, people would ask me when I’m going to get back to work and my answer would always be, ‘I’ll just go with the flow.’ Then once Aaravv came along, I was spending so much time with him and it has just become so that he’s my priority right now. When I’m ready to get back to work, it might worry me a little because the more time I spend with him I’ll get more and more attached. But Rohit has been so supportive. He’s such a hands-on father, be it changing Aaravv’s diapers or doing his other work. So I think even I get back to work, I’m sure it’ll be a smooth transition”

Further, Anita Hassanandani spoke about becoming a mother at the age of 39. She said that when she was pregnant, she was worried that her age would not make it easy. But her gynaecologist reassured her and made her realise that after all, age is just a number.

Talking about that, Anita said, “I remember I’d always be worried and go to my gynaecologist and ask her, ‘if I can do this or that because I’m 39,’ and she would tell me to relax, eat right, do a little bit of yoga and be happy. So, I’d like to tell all the 30-year-olds and beyond that age is just a number, stay positive and have a good lifestyle.”

We love her for her being so open and candid. It’s important to raise awareness about equal parenting and giving birth at a later stage in life. And we love that Anita Hassanandani has become a champion for all those things!