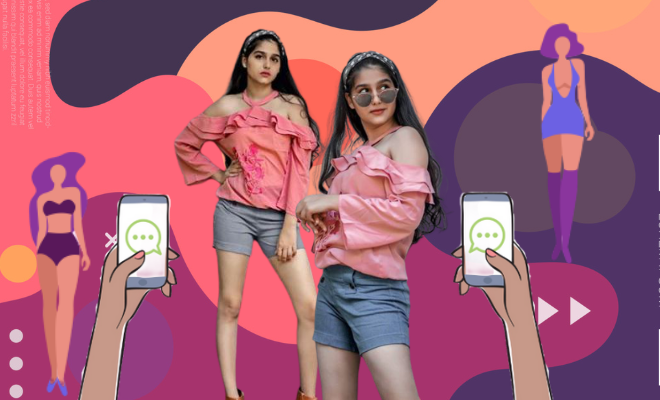 Anaswara Rajan Got Shamed For Wearing Shorts. So A Bunch Of Actresses Got Together To Remind The Internet That ‘Women Have Legs’

“No you can’t step out in that skirt”, “Isn’t this top a little too suggestive?”, “Look at her in a bikini, she’s definitely asking for it”, are just a few run of the mill (yes, you heard that right) comments that are thrown at our bodies by society. From policing us over what to wear and amply clear what not to wear, if you step out line, they will be sure to remind you and shepherd you back to what is comfortable. And that’s exactly what happened with Anaswara Rajan.

Apparently, where we live, we are not what what we eat but what we wear. A saree? Sanskaari. A skirt? Slut. And, a teenager in a pair of shorts? Characterless. Wait, what? This coming right from the feed of an 18-year-old actress, Anaswara Rajan whose social media was recently patrolled by some useless moral and self-proclaimed keepers of our culture who decided that they wanted to  express their unsolicited disapproval of her picture in a top and shorts. Just so you know, we don’t even see the problem.

Slut shaming the young actress for her choice of clothes, making crass comments at her audacity to show her legs, Anaswara was explicitly asked by one user as to why, ‘she took off her clothes at such a young age’. A statement we had a little too many issues with. Did it imply that taking clothes off at an older stage is more acceptable? Was it her age or her legs that were offensive? Did Anaswara go around asking for opinions?

However, choosing to reply with yet another post, in the same outfit but a sassier caption, Anaswara came with a bang as she wrote, “X O X O Don’t worry about what I’m doing . Worry about why you’re worried about what I’m doing…” as a befitting reply to all those who felt riled up at the sight of her legs. But that wasn’t all. Sparking a social media outrage among women and actresses who have faced this too many times, a lot of actresses stood in support of Anaswara and her choice of clothes, by breaking it to the society that, and we recommend you sit down for this because this might come as a shocker – women have legs. We don’t simply float.

In fact, Anaswara Rajan told TOI, “My parents, family, neighbours and schoolmates are perfectly fine with it. I read out a few comments to my dad and he said he would buy me a shorter dress next time. What we wear is based on our comfort and not of those who comment. And what’s the culture of those who post such abusive comments?”

Actors including Rima Kallingal, Parvathy, Nazriya, Ahaana Krishna and Apoorva Bose have put up posts against this moral policing with a clear message that reminds people of women having legs and the right to show them off. Rima captioned her picture in a bathing suit and said, “Surprise surprise!!! Women have legs.” Actress Nazariya posted a picture in a dress and captioned it #LegDay.

Other actresses like Ameya Mathew also jumped in to put up a picture in a pair of shorts and wrote, “Here is a new play being presented for those men who turn moral police at the sight of legs – ‘These legs are to kick you guys too.’” Touché to that! Malarvadi Arts Club actress, Apoorva Bose also wrote, “Oh my god, you’ve got legs? Like whaaaaa?”.

While we’re as disgusted as we can be that young women are being judged on their wardrobe choices, that women have the back of fellow women to spread the message that we don’t care, was heartening. So bottomline guys? We’ve got legs and we aren’t afraid to use them when the time comes!